In a Q&A, Professor Lisa Kern Griffin, who clerked for Justice O'Connor during the 1997-98 term, talks about the legacy of the first woman on the Supreme Court. 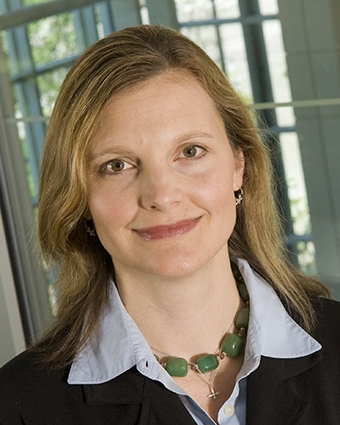 This year marks the 40th anniversary of the confirmation of Sandra Day O’Connor as an Associate Justice of the Supreme Court. As the first woman ever nominated to that position, Justice O’Connor had secured a place in American history before she even took the bench. The vote to confirm her was 99-0, and she received 60,000 letters in her first year on the Court. But during her quarter-century as a Justice, she would go on to have an enormous influence through her unique life story, conduct as a Justice, and consensus-driven jurisprudence.

In a recent book review essay in the Columbia Law Review, Professor Lisa Kern Griffin writes that Justice O’Connor, who retired from the Court in 2006 and from public life in 2015, may be America’s last universally admired person, “an icon able to transcend partisan polarization.” Griffin, a criminal procedure scholar who clerked for Justice O’Connor during the Court’s 1997-98 term, believes that admiration is no accident, and that Justice O’Connor’s life holds important lessons for the fractured civic life of today.

Griffin, the Candace M. Carroll and Leonard B. Simon Professor of Law, spoke with Duke Law Magazine about the essay, “Sandra Day O'Connor's 'First' Principles: A Constructive Vision for an Angry Nation,” and what Justice O’Connor “can still teach the country she loves.” An excerpt of her essay will appear in the next issue of Judicature.

Duke Law Magazine: If Justice O’Connor were participating in the national conversation right now, what do you think she would say about the state of our democracy, especially after the events of Jan. 6?

Professor Lisa Kern Griffin: Justice O’Connor would of course be dismayed about the state of our civic discourse, the violence on January 6, and the deep divides that have opened up in our country. But even though she would find it distressing, she would have hope. Rule of law values have endured, most obviously in the courts, and she understood American democracy as an ongoing conversation about the balance of power and a tolerable series of compromises. She also had a sense of history, and our history includes intense political anger and even deeper divisions. Though she recognized that, she believed that engaging over issues – having conversations in public life, participating in democracy, and resolving disputes – could hold the nation together. That’s why she worked so hard in her retirement to advance civic education, and it’s why I think she would still be optimistic.

DLM: What do you think she would advise leaders and lawmakers to do to heal the divides in our country?

Griffin: Her advice for just about every situation was to keep looking forward and moving ahead, to focus on what can be done next. She would disapprove of the way that revenge and regret seem to have overtaken political discourse. She experienced plenty of setbacks and faced plenty of unfairness in her early career, but she did not hold any grudges or waste time on bitterness. And when a Supreme Court decision did not go her way, she would move past that too. In fact, she didn’t like being called the swing vote because she didn’t think of decision-making as a contest – she wanted to bring people together. So I think she would say that it’s time for leaders and lawmakers to focus on our current problems and the best ideas and policies to solve them instead of indulging in an endless cycle of retribution.

DLM: The Court is much more sharply divided today, too, but it periodically exhibits the kind of civic conversation that is rarely if ever seen in our other democratic institutions. How much do you attribute that to Justice O’Connor’s legacy?

Griffin: Justice O’Connor had a profound influence on the civility and cohesion of the Court. She was unfailingly collegial, even when criticized by other Justices. And she persuaded them to engage with each other as people. They credit her with the enduring tradition of eating lunch together. As Justice Thomas says, she was the glue that bound them together, even after bruising confirmation battles or contentious Court decisions. Justice Breyer also noted her extraordinary ability to “restore good humor in the presence of strong disagreement.” Those traditions and norms maintain the Court’s stability and enhance its legitimacy.

DLM: Can you give an example of a case in which Justice O’Connor’s commitment to “civic conversation” had a significant impact on the outcome?

Griffin: Justice O’Connor’s determination to chart a middle course may have preserved reproductive rights for a generation. Her views satisfied neither side, and both Justice Scalia (who wanted to overturn Roe v. Wade) and Justice Blackmun (who authored the decision) were intensely critical of the accommodations she made to preserve its core holding. She wrote a careful concurrence in the 1989 Webster v. Reproductive Health Services case that prevented the Court from overruling Roe. And then of course she was instrumental to the plurality in Planned Parenthood v. Casey in 1992. Casey replaced Roe’s trimester system with an undue burden test. The flexible nature of that test both held together the votes to sustain Roe and allowed the conversation about reproductive rights to continue in individual states. Roe is as endangered as ever in the current Court, but in the October 2019 term, Chief Justice Roberts relied in part on the Casey compromise to once again defer the abortion debate, in June Medical Services L.L.C. v. Russo.

DLM: How would you rate the Roberts Court on upholding that legacy, including in the last term and more recent decisions?

Griffin: I think the Roberts Court shows some signs of continuing Justice O’Connor’s legacy of courtesy and compromise, though the Court may be too polarized to achieve the consensus decisions that characterized her tenure. At least in the last Court term, Chief Justice Roberts displayed some institution-building tendencies and some inclination to foster conversations between branches of the government. In addition to June Medical Services, he authored decisions declaring that even a sitting President is not categorically above the duty to produce evidence (in Trump v. Vance) and suggesting a balance between the legislative interests of Congress in enforcing their subpoenas and a sitting President’s prerogatives (in Trump v. Mazars).

DLM: Our democracy is much more polarized than when Justice O’Connor was on the Court, and many of the challenges we are facing as a country, such as the need for racial reckoning, only seem to widen the partisan divide. Could she have succeeded in this era the way that she did in her own?

Griffin: Justice O’Connor could have succeeded in any era. A common misconception holds that she was “at the right place and at the right time” to achieve what she did. But one of the things I wrote about is the truly remarkable set of personal strengths she combined. She was the right person to handle the challenges of being “first,” and she would make enormous contributions to public life today too. She was entirely without grievance, had an enormous capacity to focus on essential information, worked tirelessly, and never thought a problem too big to handle forthrightly. She also knew how to listen and how to connect with people with whom she disagreed. And she cared deeply about the well-being of others, about doing the right thing, about equality, and about fairness.

DLM: Justice O’Connor was “’notorious’ 12 years before Ruth Bader Ginsburg joined the Court,” you write, but RBG eclipsed her as a feminist icon. Should she be more revered for breaking the Court’s glass ceiling and her time on the bench?

Griffin: The contrast between Justice Ginsburg and Justice O’Connor is striking on the surface. Justice Ginsburg was a feminist icon with intergenerational appeal who inspired both movements and memes. I am pretty sure no one ever got a tattoo of Justice O’Connor, and her prim demeanor could come off as anachronistic. But beneath the surface, they were actually quite similar: both exemplars of determination and optimism, and both pragmatists and incrementalists in their jurisprudence. They also greatly admired each other. Justice O’Connor hired more clerks from Judge Ginsburg when she was on the D.C. Circuit than from any other judge, and when Justice Ginsburg joined the Court, she called Justice O’Connor the most helpful big sister that anyone could have. The opinion widely regarded as Justice Ginsburg’s most significant one was in the Virginia Military Institute case. It was originally assigned to Justice O’Connor to write, and she turned it down because she thought that it “should be Ruth’s.” They treasured each other as fellow pioneers, joked about the advocates who would mix them up during oral arguments, and had an affectionate and appreciative relationship. There are many different ways to leave a legacy and to inspire. And Justice O’Connor was keenly aware, and often said, that it’s good to be the first, but you don’t want to be the last. She focused on being highly visible and wholly ordinary at the same time. And she does deserve credit for building bridges for Justice Ginsburg and for the women Justices who followed.