Haider Ala Hamoudi, "The Death of Islamic Law"

That lawmaking in the modern nation-state is inherently in conflict with the notion of God’s Law reigning supreme is a much-discussed dilemma. That the Islamist is no less eager a participant in this state of affairs than anyone else has been less emphasized. It is nevertheless demonstrated amply by the Islamist obsession with seizing state control and enacting, selectively, shari’a as state law, rather than, as would be more logical and in keeping with the notion that God’s Law takes precedence, merely empowering a judicial class to apply and enforce shari’a in all areas of law.

The curious penchant for shari’a selectivity on the part of the Islamist, while puzzling to one in search of logic in the law, provides in fact much guidance to the central theme of this article, which is to uncover precisely why the Islamist has chosen this road of incoherence, favoring God’s Law and then adopting a state structure that clearly subverts God’s Law to man’s. Describing conventional reasons relating to power dynamics as largely inadequate, this article provides an altogether simpler answer; namely, that by leaving the state as the repository for legal authority, the Islamist may then be limited in his shari’a aims, for selective application of God’s Law is all he truly seeks.

That is, while the Islamist may say that he wishes God’s Law to be supreme over that of man, there is nothing in his actions to suggest that this rhetoric, however sincerely held, is an accurate reflection of his actual aims. The Islamist does not want God’s Law to reign supreme in areas such as corporate law and the law of business entities, where the economic consequences might be dire. On the other end lies the law of the family, where God’s Law is deemed a vital necessity. Allowing the state to control law serves the Islamist need for careful selectivity perfectly. Once the law is safely in the hands of the state, the Islamist need only bring shari’a where he wishes it (which will depend necessarily on time and place), and leave all other, largely transplanted, law, where it lies, which is to say in as authoritative a position as any shari’a-derived enactment by the state.

The paper can be downloaded here.

Professor Hamoudi, now Associate Professor of Law at University of Pittsburgh, received his B.Sc. from the Massachusetts Institute of Technology in 1993, with a double major in Physics and Humanities with a Near Eastern Studies Concentration. He was both a member of the Physics Honor Society, Sigma Pi Sigma, and a Burchard Scholar for Excellence in the Humanities and Social Sciences. In 1996, Professor Hamoudi received his J.D. from Columbia Law School, where he was a Harlan Fiske Stone Scholar. After graduating, he served as a law clerk to the Honorable Constance Baker Motley in the Southern District of New York and then worked as an associate at the law firm of Debevoise & Plimpton until 2003.

Thereafter, Professor Hamoudi went to Iraq and acted as both a legal advisor to the Finance Committee of the Iraq Governing Council and as a program manager for a project managed by the International Human Rights Law Institute of DePaul University School of Law to improve legal education in Iraq. Professor Hamoudi continues to advise the Iraqi Government, primarily through the Iraq Mission at the United Nations. His scholarship focuses on commercial law, Islamic law, and the intersection of the two in the contemporary era. He has written for numerous law reviews, spoken at conferences sponsored by the MacMillan Center at Yale University, the American Association of Law Schools, and the New York City Bar Association, and given interviews to various news organizations including the Pittsburgh Post-Gazette, the McNeil-Lehrer News Hour Online, and the New York Law Journal.

Professor Hamoudi is also the author of a blog on Islamic Law entitled "Islamic Law in Our Times." 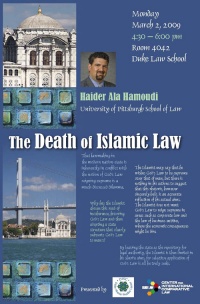 Prof. Haider Ala Hamoudi
of the University of Pittsburgh School of Law will give a talk on March 2, 2009.