“Issues of equality in the military were something I was just very aware of on a personal level,” says Warden, who was honored as a “Summer Stand-out” in Equal Justice Works’ Summer Corps program for her work with service members who faced discharge or discrimination under DADT and researching benefits available to families of gay and lesbian service members.

Her summer experience has also proven useful back at Duke.

“With the repeal of DADT, the Law School’s stated policy on military recruiting became outdated, as it referred to an exception for JAG Corps recruiters from the nondiscrimination policy for sexual orientation,” she explains. “Duke University has adopted a nondiscrimination policy that includes gender identity, and the Law School is subject to those policies as well. Because of my experience at SLDN, I’ve been sought out for information on the details of the military policy on transgender service and whether and how it should interact with Duke’s policies and the Solomon Amendment.”

As president of OUTLaw, Duke Law’s student affinity group for LGBT individuals and allies, Warden also has become involved in the activity surrounding North Carolina’s “Defense of Marriage” amendment, which will be on the primary ballot in May 2012. If passed, it will enshrine marriage between a man and a woman in the state constitution as the only valid domestic legal union; state law already bans same-sex marriage.

“We have quite the fight ahead of us,” says Warden, who already has organized two Duke Law events on the matter. OUTLaw is partnering with campus and state groups to register voters and mobilize students against the amendment.

Having apparently found a natural fit in civil rights and marriage equality matters, Warden, who majored in Chinese at Yale, says she took a winding path to law school.

“I think I resisted it for a while and I’ve kind of been all over,” she admits. “The one strain that runs through everything is a sort of abiding interest in freedom of thought and information. I became more appreciative and aware of that when living in China and encountering some really brilliant people at some of the best schools in the country, and some of my classmates didn’t really know what happened in Tiananmen Square in 1989 — in our lifetime.”

“Their sort of company ethos is if you provide information, people will be better citizens of the world. That culture was really appealing,” she says.

She got a nudge toward law school in 2008, with the debate over California’s Proposition 8.

“I voted in that election. I remember just feeling so sad, despite the excitement about Obama’s election,” she recalls. “It was really jarring to feel like all these people in this supposedly liberal state are taking away my right to marry the person I love.”

Now, Warden’s involvement in marriage equality has even extended to the classroom.

“I’m working on a note in an independent study this year, and my goal is to craft model legislation for extending the right to marry to same-sex couples, specifically discussing the appropriate scope of religious exemptions to marriage nondiscrimination laws,” she says. “It’s proven to be really interesting research, and I’m hoping to publish the final project next year.”

Warden recalls a day in 2008 when she was still living in California, riding the Google shuttle and reading the majority opinion Strauss v. Horton, the case in which the California Supreme Court upheld Proposition 8.

“I remember being so mad about it and taking notes in the margins — and this is when I’m an advertising person — about what I thought was unjust and terrible. Then I read the dissent and thought, ‘[The judge] talks about all my points! This is amazing,’” Warden says. “That kind of cemented why I’m here. It’s the lofty goals of the profession, with a capital P, to strive for justice and especially justice for unpopular or misunderstood minorities. It’s a force for good.” — Valerie Marino 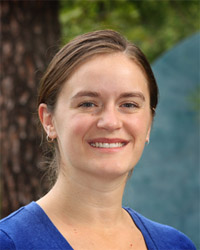 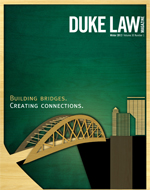