Scholarships and fellowships: "The handshake across generations" 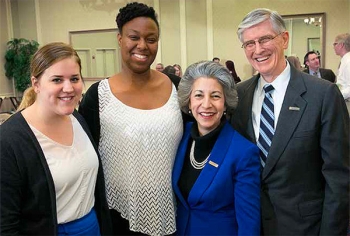 Chantalle Carles `16 was working for The Duke Endowment in Charlotte, N.C., when she “had the good fortune” to attend a presentation by Dean David F. Levi to the Endowment’s Board of Trustees. She was struck, she told 150 Duke Law scholarship and fellowship recipients and benefactors on Feb. 28, by his decision to focus on student activities and achievements in his remarks.

“That told me that Duke is a place where the students come first and where every component of the Law school is designed to help each student achieve his or her definition of success,” she said. A former member of the Teach for America corps, Carles said Levi’s remarks made her instantly “fall in love” with Duke Law.

But without the generosity of the donors to the R. C. Kelly Law and the Douglas A. Poe Mordecai scholarships, Duke Law would have been financially out of reach for her. “I would not have had the privilege of being a student of this wonderful place,” she said. “But because of your generosity, I am one step closer to doing work that matters in a profession that I love.”

Carles, who is pursuing a master’s degree in English along with her JD, served as the student speaker at the Scholarship and Fellowship Luncheon, which allowed recipients of financial aid to visit with their benefactors and thank them, in person, for their assistance. 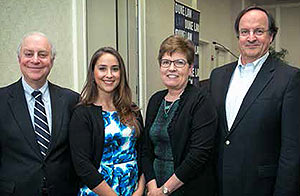 The high cost of a legal education is prohibitive for many students, Associate Dean for Admissions and student Affairs Bill Hoye confirmed in his remarks. The potential for incurring a high level of debt exercises a strong influence on students in selecting a law school, yet being able to recruit top students to the student body “really matters to Duke,” he said. “It helps us to attract top faculty, it elevates the quality of the discourse, it challenges all of our students to excel, and it builds an unsurpassed reputation in the practicing bar.

“I am very proud of our students here at Duke Law school and I am deeply grateful to each of you who make scholarships available to them,” said Hoye.

Prentiss and Gail Feagles, 1976 graduates who met on their first day on campus, both financed their legal studies through loans and grants, they told the luncheon attendees. “Were it not for that, neither of us would have been able to attend Duke Law,” said Gail, a member of the Board of visitors and a former partner at Hazel & Thomas in Falls Church, Va., where she headed the real estate practice and served on the management committee.  She is now actively engaged in numerous charitable endeavors and leading the Board of visitors of the Children’s National Medical Center.

Both of them thrived at Duke, said Prentiss, a partner and member of the tax practice group at Hogan Lovells US in Washington, D.C., where he also serves as chief financial officer for the international firm. “The support that we got from the Law school allowed us to move forward and walk out without a huge amount of debt,” he said, adding that it paved the way for the couple’s professional achievements. 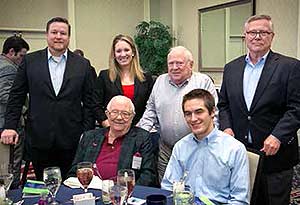 “Our Duke education provided valuable training, not only in how to practice law, but in how to solve problems and to be effective leaders in the many areas in which we have both functioned, both in our careers and as volunteers,” said Gail.

The Feagles, whose daughter, Amy, is a 2013 graduate, have long supported the Duke Law Annual Fund and renovation projects. They decided to join Duke’s university-wide financial aid initiative in 2006 “to thank Duke for what it had done for us,” Gail said.

“We wanted the privilege of changing the lives of even just a few Duke Law students, so that they can pursue their dreams and make a difference in a way that might not be possible for them if they have a great deal of indebtedness after graduation from law school. Perhaps someday, one or more of our scholarship recipients will be in a position and will feel inspired to make that same difference for those who come along behind them at Duke Law.”

That sentiment exemplifies “the handshake across generations,” said Dean Levi. 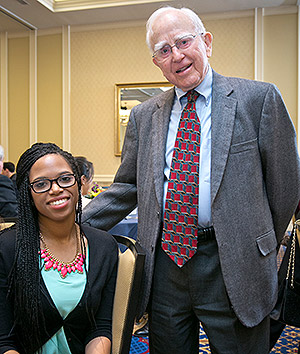 “This luncheon gives us the opportunity to honor the dedication of previous generations of Duke Law graduates,” he said. “They wanted to do something that would be significant and would sup- port our future — our future as a law school and our future students. And they did so in the hope that those students would also one day pay it forward.”

Levi reported that over his tenure as dean the Law school has more than doubled the amount of scholarship support it offers to students, from $5 million to almost $12 million annually. “I couldn’t be prouder of anything that we’ve been able to do in the past few years than this increase in scholarships,” he said.

In closing her remarks, Carles, who serves on the editorial board of Law and Contemporary Problems, on the Moot Court and Mock Trial Boards (and was a Dean’s Cup finalist), and as an Innocence Project case manager and a research assistant for Professor Marin Levy, thanked scholarship and fellowship donors for having “unlocked the door for my classmates and me.”

“It is because of all of you that my peers and I have the amazing opportunity to learn the practice of law in a place that encourages us to think creatively, to be enthusiastic, and to transform whatever space we find ourselves in,” she said.

“Your kindness and generosity made Duke Law not only a choice we wanted to make but a choice we could make.”