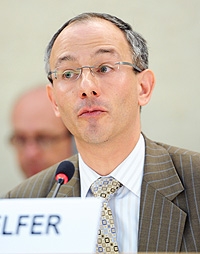 Professor Laurence R. Helfer traced the evolution of international lesbian, gay, bisexual, and transgender (LGBT) rights when he addressed the United Nations Human Rights Council in March 2012.  At a second Spring event, Helfer, whose scholarly focus includes the interdisciplinary analysis of international law and institutions as well as human rights, discussed proposals to reform the European Court of Human Rights.

Both appearances followed Helfer’s 2011 appointment as the inaugural Jacob L. Martin Fellow in the U.S. State Department’s Office of the Legal Adviser; in that capacity, Helfer briefed government attorneys on global trends relating to LGBT rights, including national and international lawmaking and litigation relating to sexual orientation and human rights.

Helfer, the Harry R. Chadwick, Sr. Professor of Law and co-director of the Center for International and Comparative Law, offered context for the historic U.N. gathering in Geneva, Switzerland.

“For the first few decades after the founding of the international human rights movements following World War II, international law did not protect LGBT individuals or same-sex couples,” he said. “That began to change in the 1980s and 1990s, initially through litigation before the European Court of Human Rights (ECtHR).

“Unlike, for example, an originalist understanding of the U.S. constitution, international courts interpret individual rights in an expansive way,” Helfer said. “The ECtHR describes the European Convention on Human Rights as a ‘living instrument’ that takes into account evolving regional standards toward greater rights protections. So while the ECtHR once summarily rejected complaints raising LGBT legal issues, the court has become much more receptive to these claims. The trend started with privacy cases, moved to gays in the military and family law cases, and has most recently focused on same-sex couples. For transgendered persons, the ECtHR has required governments to provide identity documents that reflect an individual’s change of sex, to recognize the right to marry, and to pay for gender reassignment surgery.” Helfer documents the ECtHR’s influence on domestic LGBT rights policies in a forthcoming co-authored article in a leading peer-reviewed international relations journal.

In the 1990s, similar questions arose in other parts of the world, and were taken up by national courts and international review bodies, Helfer explained. In 1994, South Africa became the first country to include in its constitution a ban on discrimination on the basis of sexual orientation. “That was followed by a sea change in many parts of the world, but also by a backlash,” he said. “More than ten countries now recognize same sex marriage ─ not only in Europe, but also Argentina, Canada, and South Africa. Several others recognize civil unions. At the same time, there has been major resistance from many Islamic and Eastern European countries.” Sudan and Iran are among the most extreme, imposing death sentences for private homosexual conduct between consenting adults.

This fractured international landscape ─ a groundswell of change met by resistance ─ was mirrored in the U.N. Human Rights Council. The March 2012 event marked the first time that the Council held a formal session devoted to LGBT legal issues. The meeting, which focused on violence and discrimination, included testimony from experts and advocates and responses by governments. Several Islamic nations attempted to block the meeting and, when that strategy failed, staged a walkout in protest.

At the meeting, the U.N. High Commissioner for Human Rights presented a report calling for greater legal protections. This was followed by testimony from the panel ─ primarily LGBT attorneys and rights advocates; Helfer was the sole academic. Helfer tried to stake out a middle ground between the advocates and the member states in attendance.

“I wanted to reaffirm the universality of human rights as applied to LGBT individuals, and in particular to stress that these issues are nothing new in the U.N. ─ 20 years of recommendations, decisions, and case law all point in the same direction. I also wanted to suggest next steps that the Council might take,” he said. “But I didn’t want to go too far, because of the risk of backlash. I tried to thread the needle.” 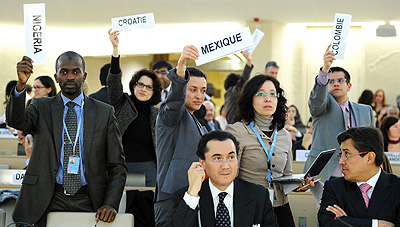 What I found most encouraging was how many governments responded favorably to the panel’s suggestions. Not only historically supportive countries, but a range of other states such as South Korea, Honduras, and Thailand. Even Nigeria, which has a very poor record on LGBT rights, at least engaged the issue on the merits. And the African group didn’t stage a walk out, which was seen as a positive step.”

Many countries called for an independent investigator to examine LGBT rights in all U.N. member nations, Helfer said. That individual could serve as a high-profile focal point for LGBT legal issues. U.N. attention also empowers NGOs working on these issues. “Once the review process starts, it is very hard to stop,” he said.

Helfer, who was teaching International Human Rights Law when he received the invitation to speak in Geneva, turned the opportunity into a “teaching moment.”

“I abandoned my plans for a class on the Human Rights Council and said to the students: ‘This is what I’ve just been asked to do. I want your suggestions for how to do it effectively, and then we will analyze and debate different strategies.’ After class, students continued to email me with advice, and I reported back to them after the Council session. They were thrilled to be involved this cutting edge legal issue.”

Also in March, Helfer and other scholars and jurists – including U.S. Supreme Court Justices Samuel Alito, Stephen Breyer, Anthony Kennedy, and Sonia Sotomayor, and judges of the ECtHR – participated in a conference analyzing the challenges that courts face in individual rights cases.

Asked to provide an overview of ECtHR institutional reforms, Helfer instead addressed the specifics of a new reform proposal – leaked just as the conference got underway – to restructure the ECtHR, which he describes as “the world’s most active and effective human rights court,” but one that is overburdened and backlogged with cases.

“I decided to discuss the new proposal, a draft amendment to the European Convention, because it had the potential to upset the balance between ECtHR judges and national decision makers,” Helfer said. “The ECtHR exercises judicial review over 47 countries, each of which has its own constitutional review mechanisms. The ECtHR is a powerful court, and that can create resistance by some governments.”

In June 2012, Helfer analyzed the proposal in greater depth in the inaugural ESIL Reflection, a new online publication of the European Society of International Law that analyzes recent developments in international law.