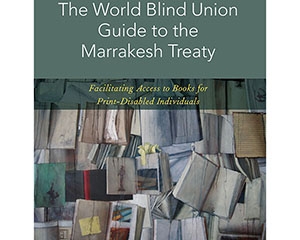 Professors Laurence Helfer and Jerome Reichman have co-authored a forthcoming guide to a new international treaty that seeks to expand access to books and other copyrighted works for people with visual disabilities.

The Marrakesh Treaty to Facilitate Access to Published Works for Persons Who Are Blind, Visually Impaired or Otherwise Print Disabled, adopted by fifty-one countries in 2013, went into effect on Sept. 30, 2016. The World Blind Union Guide to the Marrakesh Treaty will be published by Oxford University Press in March 2017. A discussion of the book by the authors will be held at Duke Law on April 3, 2017.

Helfer and Reichman partnered with Ruth Okediji of the University of Minnesota and Molly Land of the University of Connecticut – also experts on international intellectual property (IP) and human rights – to prepare the guide at the request of the World Blind Union (WBU). The authors’ goal, said Helfer, the Harry R. Chadwick, Sr. Professor of Law, is to help governments understand the treaty and the options available to them for implementing it in ways that enhance the availability and dissemination of copyrighted materials in accessible formats.

The Marrakesh Treaty, intended to encourage the creation, sharing and cross-border transfers of accessible-format materials for visually impaired persons, is the first international agreement that sits at the intersection of human rights and IP law. The treaty draws upon principles in both legal fields and engages with both Reichman’s and Helfer’s prior scholarship, as well as the writings of their coauthors.

“Jerry Reichman is one of the pioneers of the field of the international intellectual property law. I am delighted to have worked with him on the WBU Guide. He lends enormous credibility to the project,” said Helfer.

According to Reichman, “The Marrakesh Treaty is a watershed multilateral convention that builds upon longstanding exceptions to copyright for the blind in many countries. It requires all nations to adopt these exceptions and to facilitate the exchange accessible-format works among its member states.”

Helfer, the co-author of Transplanting International Courts: The Law and Politics of the Andean Tribunal of Justice (Oxford University Press, 2017), Human rights and Intellectual Property: Mapping the Global Interface (Cambridge University Press, 2011), and editor of Intellectual Property and Human Rights (Edward Elgar, 2013), explained how the WBU Guide draws upon his expertise in two legal fields. “I have written about different approaches to the relationship between human rights and IP and whether the two regimes could coexist. But the idea that an international agreement could advance human rights using the tools of copyright law is a novel way to reconcile both sets of legal rules,” he said.

Helfer anticipated that implementation could be challenging for the densely worded international agreement, which is administered by the World Intellectual Property Organization (WIPO), even though the treaty was ratified relatively quickly by governments. “Without a balanced guide to implementation, there was a risk that publishers would push to construe the treaty narrowly, crowding out the views of human and disability rights organizations in discussions among government officials about how to bring it into effect domestically,” he said.

The WBU Guide highlights how a human rights-focused approach to the Marrakesh Treaty enables governments and disability rights groups in developed nations to improve the lives of visually impaired populations in the developing world. “Take a country such as Cameroon, which is francophone, and which has a small amount of copyrighted works available to people with visual disabilities,” Helfer said. “If France and Cameroon can freely exchange accessible-format books and cultural materials, ability of print-disabled people in Cameroon to access these works expands exponentially almost overnight. Now imagine the same thing happening across francophone and anglophone Africa and among Spanish speaking countries in Latin America and you see why the treaty is a really big deal.”

Helfer said he hopes that the Marrakesh Treaty’s innovative approach will be a template for future international agreements. “Previously, there were two types of treaties at the intersection of these fields: IP treaties that view human rights as exceptions to economic interests of IP owners, and human rights agreements, which take the opposite approach, namely, that human rights are fundamental and any exceptions, including for IP protection, need to be narrow and carefully justified. Using the legal and policy tools of IP law to forge an agreement that enhances human rights goals is a new and promising approach.”