An expert in international law and human rights, Helfer will join an 18-member body that protects civil and political liberties and fundamental freedoms around the globe. 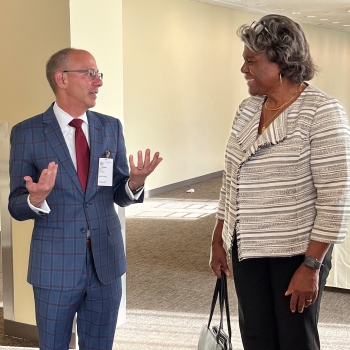 Harry R. Chadwick, Sr. Professor of Law Laurence R. Helfer has been elected to serve on the United Nations Human Rights Committee for the 2023-2026 term.

The Department of State named Helfer in December as the U.S. nominee for a position on the international monitoring body. He won the seat in an election at UN headquarters in New York on June 17.

“I am honored to be elected to the Human Rights Committee,” Helfer said. “I look forward to serving on an international body that has improved the protection of civil and political rights worldwide. I hope to build on its existing strengths and help to address the challenges it faces.”

Helfer joins a committee comprised of 18 independent experts charged with monitoring compliance with the International Covenant on Civil and Political Rights (ICCPR), an influential human rights treaty ratified by 173 states parties. Adopted in 1966, the ICCPR protects universally recognized civil and political liberties and fundamental freedoms including the right to life, liberty, and physical security, the right of due process, and freedom of expression and association.

“Professor Helfer is one of the world’s foremost scholars of international law and human rights, and he has devoted his academic and legal careers to helping safeguard the freedoms of individuals around the globe,” said Duke University Provost Sally Kornbluth.

“His deep expertise in our system of international human rights will be a tremendous asset to the committee and its mission to hold governments accountable for their commitments to protecting civil and political rights.”

Speaking at a June 6 campaign reception for Helfer, US Ambassador to the UN, Linda Thomas-Greenfield, praised Helfer’s “impeccable” credentials, calling him “one of our country’s brightest and most righteous legal minds.”

“Over the course of his career, he has advanced international human rights law without ever losing sight of why it matters. It’s not only about what is written on paper, he says, but also how people actually experience their rights,” Thomas-Greenfield said.

“He stands for what’s right and what the law says ⁠— no matter what.”

He is co-director, with Professor Rachel Brewster, of Duke Law’s Center for International and Comparative Law and a permanent visiting professor at the iCourts: Center of Excellence for International Courts at the University of Copenhagen. He recently completed a four-year term as co-Editor-in-Chief of the American Journal of International Law.

As the principal body monitoring implementation of the ICCPR, the UN Human Rights Committee meets three times a year in Geneva. Its main responsibilities are reviewing periodic reports from the state parties, evaluating communications from individuals, and issuing interpretive guidance in general comments.

Extending congratulations from the State Department, which launched a campaign in February backing Helfer’s election, spokesperson Ned Price said Helfer will bring to the committee “a determined passion to protect and promote civil and political rights.”

“The Human Rights Committee is an important treaty body established under the ICCPR, and the United States views it as a key venue in which American values and perspectives are indispensable,” Price said. “Professor Helfer is known globally as a tireless advocate for human rights, and the United States applauds his election.”