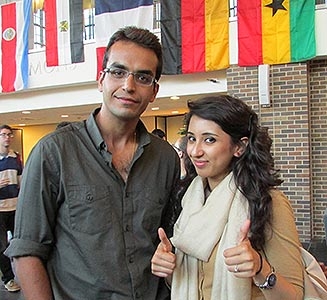 A week before the Nobel Prize was jointly awarded to Malala Yousafzai from Pakistan and Kailash Satyarthi from India, Duke Law School was the setting for Pakistan-India cooperation.  LLM students Hira Riar from Pakistan and Prasad Hurra from India decided to collaborate on a dessert entry for the Law School’s annual International Food Fiesta.  Labelling their effort the “Peace Dessert,” the two students from countries with many similarities but a history of conflict combined the slightly different recipes for Ras Malai as made in Pakistan and India into one delicious dessert.

Hira hails from Karachi, a city she describes as a cosmopolitan city by the sea which regards itself as the most diverse city in Pakistan.  Prasad is from Ahmedabad, a city renowned for its textile industry located in the state of Gujarat, the land of Mahatma Gandhi.  They met at Duke at the beginning of the LLM program in August, and despite the hostility and suspicion sometimes exhibited between their countries, they and their families have become good friends.   Hira and her husband, and Prasad and his fiancée often share meals, as both note that people from their countries tend to bond over food.

Another way in which they agree is their assessment of the LLM program at Duke.  Both note that Duke’s people—its faculty, staff and fellow students—are its best asset and find everyone warm, friendly and willing to help.  Hira labels the LLM degree as a crucial stepping stone that will assist her in focusing on her public policy and legal development career, allowing her to give back to the country she loves.  Prasad is planning on utilizing the prestige of his Duke LLM degree to help him pitch an arbitration career on an international level, allowing him to also make greater contributions.

The Food Fiesta is one of several social events organized to bring together the international LLM students and the JD students at Duke.  Part of a week-long celebration of all things international at Duke Law School, it generates good fellowship, new friendships, and much tasty food.  Hira and Prasad participated in the Fiesta in order to share their cultures’ common influences, especially as it regards food!