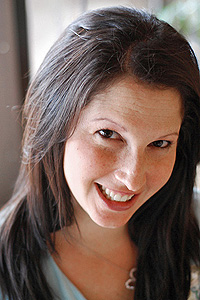 
In juggling the demands of 6- and 8-year-old sons, a full-time academic career, and a parallel career as a writer, blogger, and public speaker, Hollee Schwartz Temple says she may finally have found a way to “have it all,” a concept that also happens to be the subject of her newly published book, Good Enough is the New Perfect: Finding Happiness and Success in Modern Motherhood (Harlequin, 2011).

“I don’t want to misinform anyone that I was able to do it all perfectly, but I did the best I could on all fronts,” says Temple of the three years she spent researching and writing the book, a column on work-life balance for the ABA Journal, and blogging on work-life and parenting issues at thenewperfect.com (all with co-author Becky Beaupre Gillespie) while keeping up with her day job as director of the legal analysis, research, and writing program at the West Virginia University College of Law.

“While we were writing the book, I didn’t volunteer as much in my kids’ school. Things that I enjoy and normally prioritize I had to dial back — I had to put the focus on the book, because at that point, it was my priority.” And that’s the key to having it all — or at least getting close, Temple adds.

Based on a survey of more than 900 professional women, the book offers a blueprint for crafting one’s path to success for those torn by the desire to engage fully with both family and career. Temple and her co-author acknowledge up front that they and most of the women they surveyed have the luxury of choosing, to some extent, whether to work and how much to work, and to decide how best to balance competing interests. They share their personal journeys to finding professional and family roles that fit them perfectly as individuals. 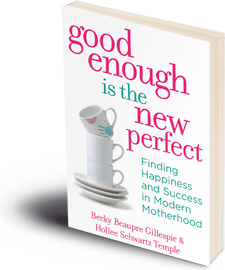 For Temple, who arrived at Duke Law with undergraduate and graduate degrees from the Medill School of Journalism at Northwestern University, the journey started at a large Pittsburgh law firm where she focused on estates and trusts for more than four years.

“I don’t regret my time there because it helped prepare me to do what I’m doing now, which is a much better fit for me,” she says. She noted that long hours at the firm made her feel isolated and kept her from engaging in networking and other activities she enjoys, such as singing. A career counselor helped her understand that teaching was a better match for her skill sets and interests.

Temple made that career transition when she landed a position as a law lecturer at the University of West Virginia where her husband, John, had joined the journalism faculty. But she says her initial attempts to mold herself as a traditional law professor were misplaced.

“I had always done the ‘gold star route,’ wanting to do whatever was considered to be the best work,” she says. “I was encouraged to write law review articles of the traditional type, which I did — I slaved over every footnote. But that was not the kind of writing career I wanted.”

A “moment of reckoning” came, she says, with the trauma of helping her husband through a long and serious illness and period of recovery when their children were very young. “It inspired me to focus on my passion and stop trying to mold myself into something I wasn’t. I wasn’t meant to be an estates and trusts professor. It wasn’t what I loved. And after having that experience, I came to just accept myself as I am and do things that light me up and excite me and not really try to bend to somebody else’s definition of success.

“It was the turning point for me. I was not going to write one more law review article that I didn’t take pleasure in. That’s when I started [the book] project.” That’s also when she was asked to lead her school’s legal writing program. “Right now, this is a really good fit for me,” she says, adding that the flexibility of her husband’s academic position allows them to fully share in parenting duties.

Reflecting on the stories of the women in the book, as well as their own, Temple says she and her co-author were surprised to pinpoint “unrelenting perfectionism” as the biggest roadblock for women in their quest for work-life balance.

“We thought it was going to be not having enough money, or not having a flexible enough employer, or not having a partner who contributes enough. And none of those things turned out to be the key factor, according to our survey,” she says. “We found that women were really doing it to themselves — by placing so much pressure on themselves, they weren’t really getting farther ahead at work and they were miserable at home. Ours is the first [study] to empirically prove that taking a more relaxed, balanced approach will actually lead to greater overall success.”

Temple says her project has resonated with many of her Duke Law classmates. “My friends from law school are some of my biggest champions on the blog and really relate to ‘the new perfect.’ They say this is a movement they might want to join,” she says, with a laugh. “Obviously, as Duke Law graduates they’re high achievers, but they realize that to have balance and happiness in their lives they can’t be shooting for the moon all the time. So I really appreciate the support I’ve had from my friends in the Class of ’99."