How to advise a president: Powell offers a vision from Justice Jackson 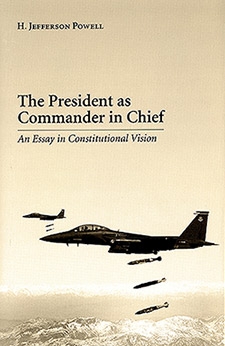 Professor Jeff Powell’s latest book, The President as Commander in Chief: An Essay in Constitutional Vision, can be read as a primer on how executive branch lawyers should approach advising their client, the president of the United States. He finds a persuasive approach in Justice Robert Jackson’s concurring 1952 opinion in Youngstown Sheet & Tube v. Sawyer, also known as The Steel Seizure Case.

The case, which involved the limits to the president’s power to seize private property at a time of national emergency, is a staple of first-year Constitutional Law casebooks. But Jackson’s 22-page opinion — to which no other justice signed on — is often edited down to present a short three-tier formulation for assessing the scope of executive power. That represents a far too narrow reading of the opinion, Powell argues.

“We ought to accept its teaching and its example of how to advise the president, and therefore of how to criticize the advice a president gets or acts on,” he says, speaking and writing with approval about the way Jackson advised President Franklin D. Roosevelt, whom he served first as solicitor general and then as attorney general.

Powell knows the task of the executive branch lawyer well. He credits his work in the U.S. Department of Justice through much of the 1990s, as deputy assistant attorney general in the Office of Legal Counsel (OLC) and, in 1996, as principal deputy solicitor general, with sparking his subsequent scholarly immersion in questions of the constitutional law that governs foreign affairs and national security and the role that law plays within the political branches of government. Powell, who returned to the OLC for 10 months in 2011-2012, spoke to Duke Law Magazine about his book, which is dedicated to his friend and former DOJ superior, Professor Walter Dellinger.

Duke Law Magazine: What are we missing when we read only the edited Jackson opinion?

Jeff Powell: In his three-tier topology, Jackson says when you are advising the president, or when the president is trying to think himself about whether he has the power to do something, you look at whether Congress agrees with him, disagrees with him, or hasn’t spoken.  It’s the part that judges tend to use. But if you read it carefully, Jackson presents the three tiers not so much as a judicial test, but as considerations the president might want to take into account, or those advising the president might want to take into account. The opinion is written as much as a reflection by an executive branch lawyer on the task of the president and his or her legal advisers as it is a judicial opinion about justifying the Court’s judgment.

I’ve long taught an essentially unedited version of Jackson’s opinion, because I’ve wanted students to see what he’s doing, not just because it’s a fuller picture of how he saw the substance of the law, but because it’s implicitly an account of how you do law in a different setting than that of a judge. Students get immersed from day one in the judicial perspective. We read appellate opinions, and we often ask them to think as if they were appellate judges. Well, Jackson’s opinion is a lesson in a different role — the role of someone who is working within a political branch, who has an allegiance to the law, but who is not acting as a judge. The political setting makes a difference.

DLM: What are the elements of Justice Jackson’s approach that you think executive branch lawyers should follow?

First, there is a fundamental asymmetry between legislative and executive power in this country. The default rule is that ordinarily, what Congress says, governs. And the president’s job is to carry out what Congress says. That general rule has less application in the area of foreign affairs, in which the president has very substantial independent authority to act, but even in that domain, if Congress has authority to legislate, its will should prevail in event of a conflict. That’s the default rule. So one of the central tasks of the executive branch legal adviser is to maintain and respect, on the part of the executive branch, this fundamental congressional primacy. That can be difficult to do, particularly if you are a political appointee — after all, you got your job because you’re on the president’s team.

The second principle is that for structural and prudential reasons, the president has the initiative in the formulation and execution of U.S. foreign policy, and foreign policy necessarily includes national security issues. So the executive branch legal adviser also has a duty to preserve robust, independent presidential authority to take action in what the president and her advisers consider to be the national interest.  In doing so, the executive branch lawyer is serving the Republic and the law, not just the parochial interests of the president.

If you look at three of the greatest lawyers to hold public office and write significantly about national security and constitutional authority matters, Robert Jackson, William Rehnquist, and Walter Dellinger, all of them agreed that there is a core of exclusive commander in chief authority — there are military decisions that only the president may make — that area of exclusive presidential authority is  quite circumscribed, and that the question of beginning large scale military operations, which is the issue that gets people the most excited and most worried about, in a matter on which in principle Congress has the final word.  Of course Congress can’t disable the president from responding to an attack and no Congress would intend to do so, but Congress should speak for the nation in deciding whether to go to war on our own, war in the sense of military operations that rise above the level of brief and low-intensity conflict. Furthermore, Jackson, Rehnquist and Dellinger all agreed that when Congress does speak to and circumscribe the scope of military operations, what the president may do is limited to what Congress has authorized.

DLM: You make the point early on that government lawyers shouldn’t write Congress or the president “blank checks.” You offer the 2002 OLC “torture memos” relating to enhanced interrogation as an example of executive branch lawyers getting things wrong in essentially saying the president has unlimited power — and not citing Youngstown. You cite one of Chief Justice William Rehnquist’s opinions, written as OLC head under President Nixon, as well as some of his judicial opinions as examples of getting things right. (You note that Rehnquist was Jackson’s clerk in 1952.)

Powell: The third chapter in the book is a brief intermezzo on Rehnquist.  I wanted to show that a very big post-Jackson figure, someone whose political perspective, at least on the face of it, was not the same as Jackson’s, adopted and then acted on the Jackson vision.  In that regard, I discuss Rehnquist’s opinion on the legality of the 1970 U.S. military incursion into Cambodia ordered by President Nixon.

Rehnquist found the incursion to be legal, but I’m not terribly concerned about whether you decide that he was right or not, although I happen to think he was plainly and incontrovertibly correct. What is far more important is the way he carefully writes the opinion so that you cannot read it as a blank check.  He concludes that in this specific situation, given these specific facts, President Nixon had the authority to do this specific thing. Nothing “big ticket” flows from that. I regard that opinion, like some of Jackson’s and some of Dellinger’s, as paradigms of what the good executive branch lawyer/adviser does. He or she doesn’t surrender the flexible, robust presidential authority that I think is part of our system. But she makes it clear that she isn’t giving the president a blank check: in the very act of saying, “Yes, this is legally authorized,” she is reminding the executive that it matters enormously that the president act within the limits of the law.  Why does that matter?   It matters, as Justice Jackson said, because the people who come to high public office are, almost always, inculcated in respect for law. Jackson comments in one of his unpublished judicial opinions that this respect for the law on the part of politicians is part of what makes our system, including the dangerous war powers, work, because the policy makers don’t want to violate the Constitution, because they intend to respect the law, the legal adviser has a critical role in reminding them of the limiting force of the law.

How you describe his or her legal authority influences what the policymaker feels free to do.  If the 2002 memos had become canonical, that would have made a very big difference in the terms of the way some policymakers down the road were going to think about their options:  it would have eliminated some of their hesitations about questionable decisions — “Well, maybe we can’t do it because Congress forbade that.”  Fortunately, OLC under President Bush subsequently repudiated the 2002 opinions.

Part of the lesson here is to have the right level of ambition for the law. The president and policymakers may not follow the lawyer’s advice.  Indeed, in the end, I think we should want the policymakers to do what they think the Republic needs, and that might mean that they do something that the lawyer did not approve. But the policymakers should do so better understanding that their lawyers think the action is illegal. The executive branch lawyer’s task is not to make the policy decision but to offer responsible advice about the law.  She may make mistakes — all of us do — but I think she’ll be doing her job right if she follows Robert Jackson’s approach.