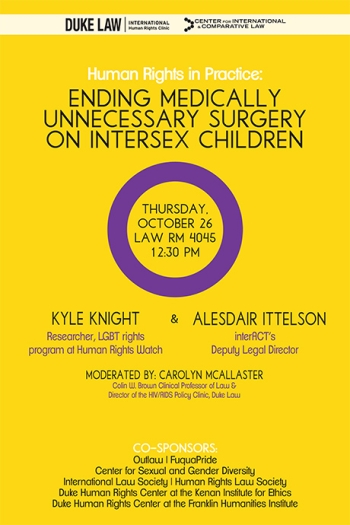 Kyle Knight, researcher in the LGBT rights program at Human Rights Watch, and Alesdair Ittelson, interACT’s Deputy Legal Director, will give a lecture on "Ending Medically Unnecessary Surgery on Intersex Children." Based on a discredited medical theory popularized in the 1960s, doctors today perform irreversible and medically unnecessary surgery on intersex children – often in infancy – with the stated aim of making it easier for them to grow up “normal.” The results are often catastrophic, the supposed benefits are largely unproven, and there are rarely urgent health considerations requiring immediate, irreversible intervention. The operations amount to violations of rights to bodily autonomy, freedom from torture, and health--and are coming under increasing scrutiny around the world. But can human rights arguments alone change a medical paradigm?

For more information, or to RSVP, please contact Ali Prince.

Kyle Knight is a researcher in the LGBT rights program at Human Rights Watch. Prior to joining the LGBT rights program, he was a fellow at the Williams Institute of the University of California at Los Angeles and a Fulbright scholar in Nepal. As a journalist he has worked for Agence France-Presse in Nepal and for IRIN, the UN’s humanitarian news service, reporting from Burma, Papua New Guinea, Timor-Leste, Bangladesh, Malaysia, and Indonesia. He has previously worked for UNAIDS, the Astraea Lesbian Foundation for Justice, and in the children’s rights and health and human rights divisions at Human Rights Watch. He studied cultural anthropology at Duke University.

Alesdair Ittelson’s commitment to advancing the rights of LGBTQI people began as a result of growing up as a gender variant child. Currently the Deputy Legal Director at interACT: Advocates for Intersex Youth, Alesdair advocates on behalf of young people who have experienced discrimination in schools, health care facilities, and other institutional settings. Alesdair began his legal career as a Skadden Fellow with the LGBT Project of the Southern Poverty Law Center in Montgomery, Alabama, and has spoken widely on issues impacting LGBTQI communities. Alesdair graduated from the University of California Berkeley, Boalt Hall School of Law, where Alesdair was President of the Boalt Hall Queer Caucus, Outreach Director of the Boalt Hall Disability Law Society, and a member of the California Law Review. Alesdair’s final year was spent as a visiting scholar at Harvard Law School, where he received a Dean’s Scholar award for his work in Disability and the Law.