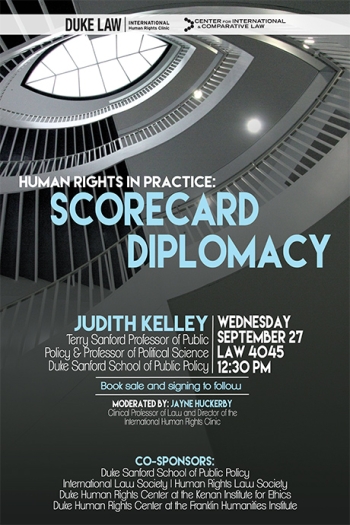 Judith Kelley, Senior Associate Dean and Kevin D. Gorter Professor of Public Policy and Political Science at Duke's Sanford School of Public Policy, will give a lecture on her recently published book titled Scorecard Diplomacy: Grading States to Influence their Reputation and Behavior. This lecture will address that, despite lacking traditional force, public grades are potent symbols that can evoke countries’ concerns about their reputations and motivate them to address the problem. The book develops an unconventional but careful argument about the growing phenomenon of such ratings and rankings. It supports this by examining the United States’ foreign policy on human trafficking using a global survey of NGOs, case studies, thousands of diplomatic cables, media stories, 90 interviews worldwide, and other documents. This is part of the Human Rights in Practice series, which is co-sponsored by the International Human Rights Clinic, and Center for International and Comparative Law. Additional co-sponsors include the Duke Sanford School of Public Policy, Duke Human Rights Center at the Franklin Humanities Institute, Duke Human Rights Center at the Kenan Institute for Ethics, Human Rights Law Society, and International Law Society. Lunch will be provided.  Book sale and signing will immediately follow in the fourth floor loggia.

For more information, or to RSVP, please contact Ali Prince.

Judith Kelley (PhD, Harvard) is the Terry Sanford Professor of Public Policy and Professor of Political Science and the Senior Associate Dean at the Duke Sanford School of Public Policy. She is also a senior fellow with the Kenan Institute for Ethics.  Her publications reflect her research interests in the role of international actors in promoting political and human rights reforms. In 2012 she was inducted into the Bass Society of Fellows at Duke, which recognizes faculty for excellence in both teaching and scholarship. The Smith Richardson Foundation has supported her as a Policy and Strategy Fellow. She also was the Chair of the Editorial Board of International Organization.

Kelley's work focuses on how states, international organizations and NGOs can promote domestic political reforms in problem states, and how international norms, laws and other governance tools influence state behavior. Substantively, her work addresses human rights and democracy, international election observation, and human trafficking. Past work has focused on the International Criminal Court, the European Union and other international organizations. She is leading a major research project to study the effectiveness of the diplomacy of the United States on human trafficking. She is the PI on a grant from the National Science Foundation for this project and another from the Smith Richardson Foundation. Her newest book "Scorecard Diplomacy: Grading states to influence their reputation and behavior," is on human trafficking, and is published with Cambridge University Press, 2017.  Her work has been published by Princeton University Press, and in journals such as the American Political Science Review, the American Journal of Political Science, International Organization, International Studies Quarterly, and the Journal of Common Market Studies.