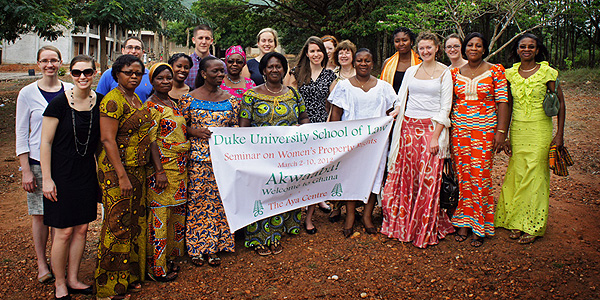 Eleven upper-year students focused on the legal, constitutional, and social provenance and implications of two bills pending before the Ghanaian parliament that would alter spousal intestate succession and property rights in that country.

Over their March study break, students in Integrating Legal Frameworks: Customary Law, Statutory Law, and Spousal Property Rights in Ghana and their professors, Duke Law Professor Kathryn Webb Bradley and Divinity Professor Esther Acolatse, immersed themselves in field research in the West African nation. In the eastern city of Ho and the capital, Accra, they met with an array of stakeholders in the legislative process, such as parliamentarians, grassroots women’s rights advocates, traditional and religious leaders, lawyers, jurists, and scholars.

Guided by a partner at the Law Institute in Accra, the students subsequently produced materials for use by Ghanaian advocates pushing for the bills’ passage and by judges who will eventually be charged with the laws’ interpretation and implementation.

In a separate effort, seven 2Ls spent their March break in Haiti, working on three legal projects related to that country’s ongoing attempts to improve their legal system and to rebuild after a devastating 2010 earthquake. The trip was a component of their self-initiated ad hoc seminar facilitated by Guy-Uriel Charles, the Charles S. Rhyne Professor of Law and a native of the Caribbean nation. He had previously worked with four of the students following their 2011 spring-break trip to Haiti to produce a video documentary on the plight of Haitians who lost their homes in the earthquake; they subsequently established the Haitian Legal Advocacy Project at Duke Law.

After classroom studies on the Haitian political, institutional, and consti­tutional framework, the students elected to work in teams on issues pertaining to judicial reform, housing and relocation, and women’s rights.

The two human-rights related seminars represent a continuation of Duke Law programs designed to offer students opportunities to apply their studies and skills in the area of human rights law to real-world problems.