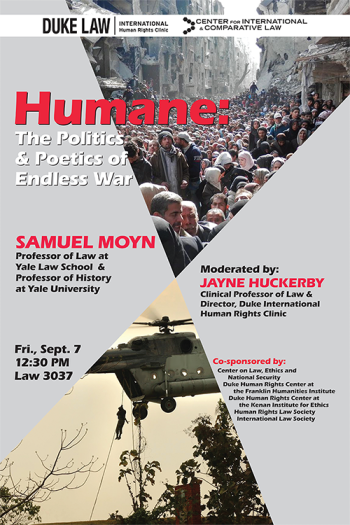 Samuel Moyn from Yale University will ask what is wrong with the forever war – as the post-9/11 campaigns of the United States have been called. For a broad swathe of critics, the trouble is its inhumanity - especially the peril it brings to civilians. What, however, if the opposite is true - and the problem is that the war on terror is the most humane war ever fought in history? He will throw out some early hypotheses for collective discussion as part of a new project on the stakes of making war more humane when there are no strong controls on its chronological or geographical scope.

Samuel Moyn is Professor of Law and Professor of History at Yale University. He received a doctorate in modern European history from the University of California-Berkeley in 2000 and a law degree from Harvard University in 2001. He came to Yale from Harvard University, where he was Jeremiah Smith, Jr. Professor of Law and Professor of History. Before this, he spent thirteen years in the Columbia University history department, where he was most recently James Bryce Professor of European Legal History. His areas of interest in legal scholarship include international law, human rights, the law of war, and legal thought, in both historical and current perspective. In intellectual history, he has worked on a diverse range of subjects, especially twentieth-century European moral and political theory.

He has written several books in his fields of European intellectual history and human rights history, most recently Not Enough: Human Rights in an Unequal World, published in April 2018 by Harvard University Press. Professor Moyn's other books include The Last Utopia: Human Rights in History (2010), Christian Human Rights (2015) (based on Mellon Distinguished Lectures at the University of Pennsylvania in fall 2014), and he has edited or coedited a number of others. Over the years he has written in venues such as Boston Review, the Chronicle of Higher Education, Dissent, The Nation, The New Republic, The New York Times, and The Wall Street Journal. Professor Moyn is a coeditor of the journal Humanity. He helps with several book series: the Brandeis Library of Modern Jewish Thought, the Cambridge University Press “Human Rights in History” series, and the University of Pennsylvania Press “Intellectual History of the Modern Age” series. For seven years, he served as coeditor of Modern Intellectual History. He solicits book reviews on human rights for Lawfare and is on the editorial boards of Constellations, Global Intellectual History, the Historical Journal, the Journal of the History of International Law, and Modern Judaism.