An influx of evacuees from Afghanistan last summer has provided new challenges and opportunities for student-attorneys training to help asylum seekers. 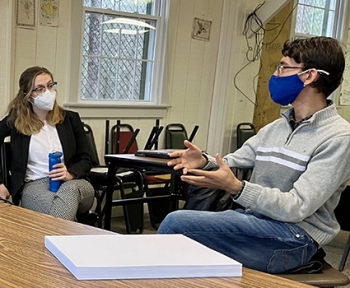 As humanitarian crises unfolded around the globe, Duke Law’s Immigrant Rights Clinic worked this year to put asylum-seekers in North Carolina on the path to a new life.

Student-attorneys assisted people fleeing danger in Afghanistan, Central America, and South America with a range of legal matters and successfully represented clients in their efforts to become permanent residents of the United States. They also found a way to leverage that knowledge, developing an electronic toolkit of resources that is being shared with others assisting asylum-seekers as well as claimants representing themselves.

While the work was challenging “both analytically and emotionally,” it was also an incredible opportunity, said Mary Chandler Beam ’22, who with Kate Weaver ’22 and the clinic’s supervising attorney Shane Ellison helped gain a special immigrant visa for an Afghan national last month.

“Unfortunately our client’s situation is not unique, but thankfully the work we have done for him will be used to help others like him,” Beam said.

“Working with Kate Weaver and Professor Ellison on this case has taught me a great deal, not only about the complex landscape of immigration law, but about how kind attorneys can meaningfully affect the lives of others.”

In March, Theresa Babendreier ’22 and Madeline Hundley ’22 successfully vacated the removal orders for a Venezuelan couple after they were found to have been represented in their initial asylum claim by a non-lawyer practicing law without authorization. The couple is seeking temporary protected status while they move forward with applications for humanitarian protection and family-based immigration status with the assistance of the clinic.

In another case, Luis Basurto Villanueva ’22, Christine Mullen ’21, and Vicki Ye ’21 successfully represented a father and husband in the appeal of his removal order before the U.S. Court of Appeals for the Fourth Circuit. Relying on an argument drafted by Villanueva, the court vacated the client’s removal order and agreed that the immigration agency must consider his application to remain in the country based on the support he provides to his family members, who are U.S. citizens.

​Defending the rights of asylum-seekers

Two clinic student-attorneys from Duke’s international LLM program, Laura Quick Lourenco de Lima LLM ’22 and Rajeeta Bhandari LLM ’22, represented a family in presenting their applications for asylum. U.S. officials compelled the family to remain in Mexico for more than two years while they awaited an opportunity to request protection. During this time, the family was kidnapped in Mexico, held for ransom, and separated from one another, with the son fleeing by himself to the U.S. and remaining separated from his parents for over a year. Lourenco de Lima and Bhandari’s representation of the family allowed the parents and children to stabilize, reunify, and finally submit their request for asylum.

The clinic is also appealing a decision by the Charlotte Immigration Court denying asylum to a Honduran woman, despite compelling testimony that she suffered years of gender-based violence in her native country. Students prepared more than 1,500 pages of documentary evidence, witness declarations, and other forms of corroborating proof for the woman’s final hearing in December 2021. During the hearing, Hundley, Alejandra Mena ’22, and Melissa Bueno ’23 managed direct examination of their client and an expert witness and presented opening and closing statements.

While the Charlotte immigration judge who issued the decision credited the woman’s testimony and found that she had suffered persecution in her country, he denied her asylum protection on the grounds that she did not suffer harm due to a qualifying protected characteristic. Ellison said the case could help build a platform on which to seek reform of U.S. asylum law with regard to gender-based violence.

“Much of the international community has recognized that individuals facing violence on account of their gender in countries where impunity for such violence is the norm deserve refugee protection,” he said. “The United States must catch up with the international consensus.”

Despite the outcome, the student-attorneys said working on the case was a challenging and fulfilling experience.

“We poured our hearts and minds into defending a claim that we strongly believed merited asylum,” Mena said. “I hope that our client gets the asylum she deserves under the law, and that her case serves as a stepping stone to greater immigration reform.”

“Something Professor Evans said shortly after the trial has stuck with me,” Hundley added. “This is the first time that our client and her family have been able to live together knowing that every member of the family is safe.

“I am thankful that the clinic has at the very least brought our client more time to be with her family, and I remain hopeful that the clinic can achieve a positive outcome for her at the Board of Immigration Appeals or federal court.”

In addition to representing families seeking asylum, the clinic has been building resources and support for asylum-seekers who cannot pay for an attorney or secure help from nonprofits. Earlier this year, Weaver, Basurto Villanueva, and Andrea Guzman ’22, launched a website and toolkit to provide guidance to asylum seekers following a federal settlement in Mendez Rojas v. Wolf. The resource was designed to aid parties assisting asylum-seekers from any country and pro se claimants themselves.

Guzman and Weaver presented the electronic toolkit in a webinar hosted by the American Immigration Council in March that attracted nearly 450 participants nationwide, making it one of the organization’s best attended sessions ever.

Separately, 24 Duke Law students teamed up with students from UNC’s School of Law and the Charlotte Center for Legal Advocacy to volunteer their time and provide the first workshop in the state for asylum-seekers who do not have attorneys and are facing deportation in immigration court. The pro se workshop assisted 20 families in filing their asylum applications in order to secure their rights in immigration court.

Student attorneys have also responded to the ongoing legal needs of Afghan evacuees in North Carolina, both in direct representation of clients and by developing a toolkit of resources to aid pro bono student volunteers and attorneys working with Afghan families.

Some 130,000 people were airlifted out of Kabul, Afghanistan, during the last two weeks of August 2021 as the U.S. and allies began exiting the country they had occupied for 20 years. More than 76,000 Afghan nationals have come to the U.S., with North Carolina accepting about 1,400 who have settled in Asheville, Charlotte, Durham, Greensboro, New Bern, and Raleigh. Many of those evacuees require assistance with the complex process of pursuing long-term immigration relief, including screening for asylum eligibility, Ellison said.

Ellison and student attorneys began meeting with Afghan nationals at Fort Pickett, one of the military bases on which they were initially housed, in September, shortly after they began arriving in the U.S. The group counseled the evacuees on the pathway to remaining in the U.S. and helped prepare them for the complicated process of applying for asylum, made longer and more difficult because of an enormous pre-existing backlog of cases.

The clinic is working in partnership with the Duke Immigrant and Refugee Project to prepare asylum claims for ten Afghan families and has benefited from the assistance of Sebghatullah Jalali LLM ’19, who returned to his native Afghanistan after graduating from Duke Law but came back in December 2021 to work as a fellow in the Immigrant Rights Clinic. Jalali’s knowledge and background have been invaluable in helping the Afghan clients, Ellison said.

Beam and Weaver guided their client, an Afghan man, through the process of seeking a Special Immigrant Visa through a program that grants permanent residence to people who worked for the U.S. government abroad, as well as preparing his asylum application. Last month they learned that his Special Immigrant Visa petition had been approved.

“Navigating the U.S. immigration system is challenging for everyone, but especially so for Afghans because of the high number who were evacuated at once and the unique sets of exceptions and regulations that apply to them,” Weaver said. “Although adjusting to life in the U.S. isn’t easy, I’m grateful that we had the chance to make the legal side of his experience easier, and I am appreciative of the new lawyering skills I gained in the process.”

Beam and Weaver’s work preparing their client’s asylum application contributed to the creation of a comprehensive toolkit for Afghans seeking asylum in the U.S. that includes a draft legal asylum brief and an indexed library of relevant country conditions and human rights reports. The toolkit is being used by 32 first-year law student volunteers with the Duke Afghan Asylum Project (DAAP) who are assisting ten Afghan families preparing to seek asylum.

“Working on this project, and previously with Afghan refugees, showed how much of a legal need there is for so many families,” said Guzman, who was the lead writer for the template legal cover letter.

“These asylum seekers and their families risked so much to help Americans in Afghanistan, so I am glad that we are now able to make their immigration process easier as part of our duty to them. I hope that this work can be shared with other law students and attorneys across the nation so that many more Afghan refugees can have legal assistance in applying for asylum.”

Launched in 2020 at Duke Law with a gift from the Ting Tsung and Wei Fong Chao Foundation, the Immigrant Rights Clinic recently received an additional commitment from the foundation that will support its operations for the next five years.