The Duke Environmental Law and Policy Clinic launched an annual Environmental Justice Symposium series on Feb. 9 with a daylong examination of the challenges faced by many poor and minority communities in the United States in accessing  safe drinking water and sanitation services.

With the second event planned for March 8 and 9, 2019, the symposium series builds on the clinic’s continual engagement with communities impacted by environmental injustice since its establishment at Duke in 2007 as a partnership between the Law School and the Nicholas School of the Environment. In one of its first cases, students worked with a citizens’ group to successfully oppose construction of a new Navy landing field in rural Sandbanks, N.C., which would have destroyed parts of a historic African American community. And its longest ongoing case, involving efforts to remediate the toxic legacy of a former Alcoa aluminum smelter in Badin, N.C., also has issues of environmental justice at its center: The former plant and its dump that is leaching hazardous waste is located in West Badin, the historically African American section of the once segregated town.

Clinical Professor Ryke Longest, the clinic director, said the goal of the symposium series is to allow an interdisciplinary audience to hear from people with lived experience on matters of environmental injustice and the struggle for solutions, like the residents of Sandbanks and West Badin. “These events are designed to give communities the microphone and to give scholars and students a chance to listen and respond,” he said.

At the February symposium, Omega Wilson of Mebane, N.C., described the backlash — including death threats — he and his wife, Brenda, faced when they advocated for first-time sewer connections and safe drinking water access in historically minority communities; many African American and Native American residents primarily relied on failing backyard septic systems and some outhouses despite their close proximity to the city’s sewer plant, built in 1921. “The only way we could get the city council to move, to even act as if we existed, was by filing complaints with the U.S. Department of Justice,” Wilson said during a morning panel discussion.

Beginning in 1994, the Wilsons, who are working with the clinic to document their legal strategies and legacy as organizers, and members of their community association, convened a series of conversations at church functions and family gatherings. They eventually helped establish the West End Revitalization Association to coordinate advocacy and activism for basic amenities for African American and Native American residents and taxpayers in Alamance County and Orange County, N.C. 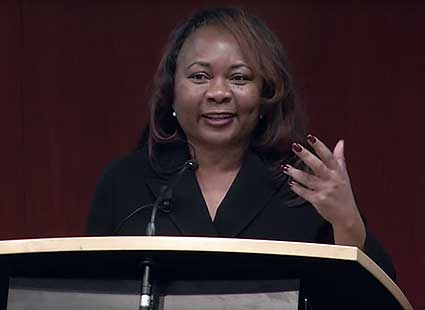 In her symposium keynote address, Catherine Coleman Flowers, the founder of the Alabama Center for Rural Enterprise Community Development Corporation (ACRE), described the organization’s work in Lowndes County, Ala., where more than 40 percent of households lack access to proper sanitation.

Flowers, a practitioner in residence at Duke’s Franklin Humanities Institute, explained that in the majority African American county, sewage bubbles up from failing septic systems and back-ups are frequent when it rains. With waste often piped directly from homes to open-air ditches, children sometimes can’t play outside and families deal daily with both stench and its resulting stigma. Residents of Lowndes County, she said, face fines and even criminal charges for failure to maintain working septic systems, yet few can afford to install specialized systems designed for the area’s soil conditions.

Flowers outlined ACRE’s approach to mitigating the problem through an array of legal strategies and community organizing tactics rooted in the civil rights movement. (Environmental Law and Policy Clinic students are now helping ACRE identify entities that could help Lowndes County residents pursue structural improvements and manage waste.) Flowers also connected ACRE’s work in Alabama with campaigns for clean water in Michigan, West Virginia, and South Dakota. “We have to look at intersectionality,” she said. “At some point, we have to find a way to fight together, because at the end of the day we all need access to water.”

“At the end of the day, we came back together to share the solutions we’d discussed in small groups,” said Longest. “The notes completely filled the huge whiteboard in the lecture room. Folks were eager to collaborate and put their ideas to work.”

Inspired by the success of the first Environmental Justice Symposium, a team including representatives from Duke Law School, the Nicholas School of the Environment, Yale Law School, Yale School of Forestry and Environmental Studies, and Vermont Law School and a diverse group of grassroots leaders, is shaping the second as an event that will spark conversations, build relationships, and deepen attendees’ interdisciplinary analysis of environmental justice and the law. The symposium, scheduled for March 8 and 9, 2019, will focus on disaster preparedness and recovery.