The May 7 submission was co-signed by individuals associated with human rights clinics at more than 20 U.S. law schools. 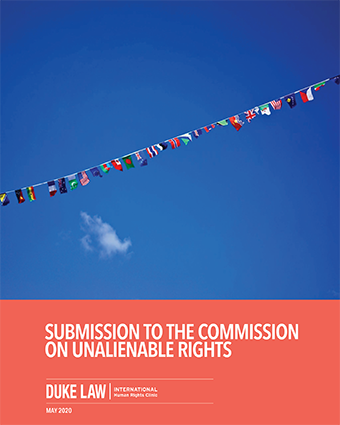 Cover of the clinic's submission

Duke Law School’s International Human Rights Clinic has authored a submission to the Commission on Unalienable Rights that was co-signed by individuals associated with human rights clinics at more than 20 U.S. law schools. The joint submission on May 7 critically examines the propositions relied upon by the commission and argues that key principles of international human rights law should instead guide its work.

The commission was formed by U.S. Secretary of State Michael R. Pompeo to provide him “with advice on human rights grounded in our nation’s founding principles and the principles of the 1948 Universal Declaration of Human Rights,” according to the State Department website. The commission’s members consist almost entirely of academics, including some law professors.

The commission’s launch last July quickly drew the attention of hundreds of human rights advocates nationwide because of its mandate, membership, and perceived risks to women’s, LGBTI, and socioeconomic rights. More recently, its establishment has been subject to a lawsuit.

“The ideas that human rights might be in crisis or that human rights can be co-opted and misused are not unique to this body,” said Clinical Professor Jayne Huckerby, the clinic’s director. “The worry with the commission’s mandate, membership, and work is that these concerns are a pretext to double-down on rolling back rights protections, particularly when it comes to gender.”

The commission has met five times, focusing on “founding principles,”, “international legal commitments concerning human rights that the United States has entered since World War II,” and “the role of human rights in American foreign policy.” A total of 10 experts total have presented at the meetings.

The clinic monitored all five of the commission’s public meetings, with students keeping meeting records and engaging in advocacy, research, and analysis that involved delving directly into many of the most pressing and timely questions regarding human rights law and its institutions.

The clinic’s submission argues that 10 “core concerning principles” have guided the commission’s work, including propositions about human rights being in crisis requiring fundamental re-examination, the proliferation of human rights, the primacy of religious freedom over other rights, and the irredeemable failure of treaties and institutions to protect rights.

“While some of the commission’s concerns — such as how to address governments’ misuse of rights or analyze the efficacy of human rights treaties and institutions — are shared by many in the human rights community, the commission in its composition, set-up, and public meetings has reflected some concerning and often one-sided understandings of how these challenges are best framed, assessed, and solved,” Huckerby said.

The submission then puts forth eight principles of international human rights law that the commission should instead rely upon, including that “there is no hierarchy of rights,” that sexual and reproductive health are “human rights guarantees,” and that rights such as the right to food, work, and social security are “equal to civil and political rights.”

“Consistent with international law and realities of how rights are interrelated, the commission must recognize that economic, social, and cultural rights are fundamental human rights and essential for human existence,” said Senior Lecturing Fellow Aya Fujimura-Fanselow, the clinic’s supervising attorney.

The commission is expected to submit a report to Pompeo in July.