Introducing the Duke D.C. Summer Institute on Law and Policy 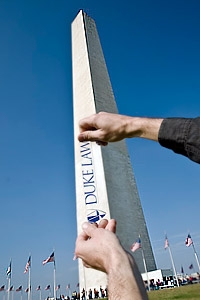 “We have an amazing public law faculty, and this institute is an outgrowth of their work both teaching about policymaking, and engaging at the highest levels of policy debates,” said Dean David F. Levi. “Our continued presence in Washington is an important part of Duke Law School.”

Professor Neil Siegel is the faculty director for the institute, which is open to Duke Law JD and LLM students as well as college juniors and seniors, students at other law schools, and professionals who craft and interact with federal law and policy, including congressional staffers, business people, foundation and non profit leaders, lobbyists, and Beltway journalists.

Details about the institute and admissions information are available at law.duke.edu/dcinstitute. See sidebar for a full list of Summer Institute faculty.

A scholar of constitutional law and the federal courts, Siegel said he is gratified that Duke Law is making Duke’s premier law faculty available to people who might not otherwise have access.

“When I was a Duke undergraduate years ago, I was aching to take classes at the Law School with law faculty like William Van Alstyne, but I had no opportunity,” he said.  “Getting people from different backgrounds together in class will furnish rare academic opportunities.  This is a chance, for instance, for college students to experience law school before committing to attend law school, and for congressional staffers who are tasked with drafting legislation to deepen their understanding of how that legislation will be interpreted in the courts.”

Siegel also is delighted to be offering short courses on federal law and policy exactly in the location where they are most relevant.  “D.C. is an exciting place.  If you care about some aspect of law and policy — whether constitutional law, federal statutory law, or federal regulatory law and policy — whatever it is that engages you in the realm of law and policy, it is going on in D.C.  The location in which these courses will be taught will enrich the discussions.  The faculty have connections to D.C., and they’ll be bringing in guest speakers and addressing subjects that will be pertinent to what’s going on in D.C.”

“We have an amazing public law faculty, and this institute is an outgrowth of their work both teaching about policymaking, and engaging at the highest levels of policy debates.”

One of the institute’s faculty members, Professor Christopher Schroeder, has spent most of the past three years in the nation’s capital as assistant attorney general for the Office of Legal Policy (OLP) in the Department of Justice. It was not his first stint in Washington — Schroeder served as acting assistant attorney general in the Office of Legal Counsel during the Clinton administration and earlier served as chief counsel to the Senate Judiciary Committee.

Other faculty members teaching during the institute’s inaugural session include Professor Guy Charles, a leading expert in constitutional law and founding director of the Duke Law Center on Law, Race and Politics; Professor of the Practice Lawrence Baxter, who has divided his career between academic pursuits and leadership positions in finance; and Siegel, co-director of Duke’s Program in Public Law and a prolific scholar whose writing, both academic and editorial, has focused on a range of constitutional issues.

Baxter, who will be teaching a course about the debate over financial regulation, is excited to teach a class with such topical relevance, and to teach it at the geographic heart of the issue.

“Too big to manage, too big to fail, too big to regulate, too big to jail — these are recurring themes in the modern public policy debate about financial regulation.  You’ve got the attention of some of the top regulators, legislators, and commentators in the field,” he said. “It’s going to be timely for years to come, but it couldn’t be more timely than now. While most of the financial institutions are based in New York, London, or Frankfurt, key policies are being formulated in Washington. D.C. is the perfect environment for this course and this discussion.  With Congress still in session, students will likely be able to watch the issues being debated by policymakers even as we discuss them in class.”

Lawrence Baxter
Professor of the Practice of Law
Professor Baxter focuses his teaching and scholarly research on the evolving regulatory environment for financial services and beyond. He also has published extensively in the areas of United States federal and state administrative law; domestic and global banking and regulation; and professional training and responsibility.

Guy-Uriel Charles
Charles S. Rhyne Professor of Law
Professor Charles is the founding director of the Duke Law Center on Law, Race and Politics. He is an expert in and frequent public commentator on constitutional law, election law, campaign finance, redistricting, politics, and race.

Ted Kaufman
Visiting Professor of the Practice
Sen. Ted Kaufman represented Delaware in the United States Senate from Jan. 16, 2009 to Nov. 15, 2010, after which he became chair of the Congressional Oversight Panel. Kaufman has taught at Duke Law School since 1991; he also has taught in the Fuqua School of Business, and the Sanford School of Public Policy.

Christopher Schroeder
Charles S. Murphy Professor of Law and Public Policy Studies
Professor Schroeder, director of the Program in Public Law, recently served as assistant attorney general for the Office of Legal Policy (OLP) at the United States Department of Justice, a post he assumed in April 2010.