Istanbul, Cairo, Darfur… Durham? Along with a brief sojourn in Cyprus where he got married, these have been the latest stops in James Pearce’s international odyssey.

Durham may seem like an anomaly in Pearce’s itinerary, but he says that Duke Law School was the natural next step after getting a degree in human rights law at the American University in Cairo, and working with refugees in Turkey, Egypt, and Sudan. Pearce enrolled immediately after serving for a year as a rule of law officer with the United Nations Development Programme in the troubled Darfur region of Sudan, in northeast Africa.

“I was the only one among the rule of law officers in the office who didn’t have a degree that allowed me to practice law,” he says, noting that a master’s degree in human rights law does not confer that privilege. “I wanted a better understanding of how the law structures human interactions, how it can be relevant in a society, and to what extent people’s adherence to the law legitimizes it. These are, to me, the fascinating philosophical questions, and I felt like I needed to really know the law to explore them.”

Pearce taught at a school for refugee children, mostly from Iraq and the Horn of Africa, in Istanbul, Turkey following his 2003 graduation from Yale, where he was a history major. “I started to get a sense about the kinds of difficulties they were facing in Istanbul, even difficulties accessing organizations specifically set up to work with them,” he says. “This fascinated me and disturbed me, and so I wanted to get a better sense of what was going on and how I may be able to do something to address it.” That curiosity led to his studies at the American University in Cairo, where he graduated with a master’s degree in human rights law in 2006.

In Cairo, Pearce worked for Africa and Middle-East Refugee Assistance (AMERA), a non-profit organization that assists refugees and trains human rights lawyers. “People who I’d worked with there had gone on to work for the United Nations as rule of law officers in Sudan,” Pearce recalls. “It seemed like a good fit for me, too. My master’s thesis was on the relationship between humanitarian intervention and internally displaced persons, so this was the kind of work I felt committed to, that I wanted to do.”

In El Geneina, a city with “a wild west feel” — and eight refugee camps ranging in size from 2,000 to 25,000 people — in volatile western Darfur near its border with Chad, Pearce worked with local lawyers and paralegals, providing training on dispute resolution, Sudanese law, human rights law and governance issues, as well as funding and support for efforts to educate the local populace about the legal system.

“In Darfur, people go to community leaders rather than the judicial system,” he says. “In much of West Darfur, perceived wrongs are handled through custom and traditional practices. We were able to get lawyers for some people who didn’t even know what lawyers are.”

Although he satisfied his goal of augmenting his theoretical studies of humanitarian issues with real-world experience, Pearce found that his work in Darfur did not ease the skepticism he felt about the U.N. before he took the job.

“I wasn’t really sure that we were accomplishing that much,” he says, bluntly. “I learned a tremendous amount about Sudanese politics, about the Arabic language, and about how the U.N. functions in all this, but I really didn’t feel that the resources expended for our particular program were justified by the results we produced. Small victories are nice, and they make you feel good, but not when you’re pumping millions and millions of dollars into something.”

While it fueled skepticism about his program, Pearce’s Darfur experience also fueled his interest in law.

“We’d hold workshops and talk about things like ‘What does it take for an armed movement to become a political party?’” he recalls. “We would try and put the opposition movement leaders on the spot and say, ‘You’ve shown that you don’t like things the way they are. What does the rule of law mean to you? What kind of platform do you support?’” He applied to Duke — he has family roots in the Triangle — while still in Darfur.

Pearce has worked quickly to share his interests with the Duke Law community. He has co-founded the Student Organization for Legal Issues in the Middle East and North Africa (SOLIMENA), a group that promotes educational, research, and professional development opportunities for students with an interest in the region and its peoples. The group is planning a conference on Darfur at the Law School in March. 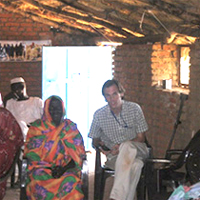