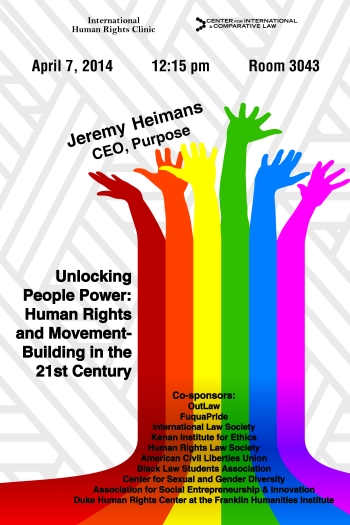 More than ever before, we have access to new technological tools and tactics that unlock in people a sense of their own power. The 21st century movements that harness the power of mass participation will be key to solving the world's biggest human rights challenges. Jeremy Heimans, co-founder of Purpose and All Out, a global LGBT movement 2 million members strong, examines current strategies and successes around mobilizing some of the world's most marginalized communities.

Jeremy Heimans (@jeremyheimans) is co-founder and CEO of Purpose, a home for building 21st century movements and ventures that use the power of participation to change the world. Since its launch in 2009, Purpose has launched several major new organizations including All Out, a 1.8 million-strong LGBT rights group, built the world's first open-source global activism platform, and advised institutions like the Bill and Melinda Gates Foundation, the ACLU, and Google.

Heimans has been building movements since the age of 8 when, as a child activist in his native Australia, he ran media campaigns and lobbied leaders on issues like children's rights and nuclear non-proliferation. In 2004, he dropped out of Oxford to co-found a campaign group in the U.S. presidential elections that used crowd-funding to help a group of women whose loved ones were in Iraq hire a private jet to follow Vice-President Dick Cheney on his campaign stops, in what became known as the "Chasing Cheney" tour. The following year he co-founded GetUp, an Australian political organization and internationally recognized social movement phenomenon that today has more members than all of Australia's political parties combined. In 2007, Heimans co-founded Avaaz, the world’s largest online citizens’ movement, now with more than 24 million members.

In 2011, Heimans received the Ford Foundation's 75th Anniversary Visionary Award for his work as a movement pioneer and the World Economic Forum named him a Young Global Leader. In 2012, Fast Company ranked him 11th on their annual list of the 100 Most Creative People in Business. The World e-Government Forum has named him as one of the top ten people who is changing the world of politics and the internet. His work has been profiled in publications like The Economist and The New York Times.  Heimans began his career with the strategy consultants McKinsey & Company and he has degrees from Harvard University and the University of Sydney. He lives in New York.