Jerry W. Blackwell, prosecutor in the Derek Chauvin trial, to speak with Jones and Lovelace on Race, Policing, and Activism 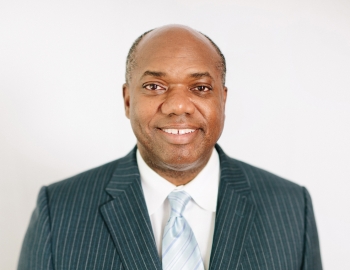 Jerry W. Blackwell, a member of the prosecution team in the Derek Chauvin murder trial, will speak with Professors Trina Jones and H. Timothy Lovelace, Jr., from 6-7:30 p.m. on Monday, Sept. 20, at the virtual event UNIV 101 Presents: Race, Policing, and Activism.

The discussion, the first in the University’s “UNIV 101 Presents” speaker series, is open to all and is sponsored by the Duke Center on Law, Race, and Politics, the Duke Council on Race & Ethnicity, and the University’s Office of Undergraduate Education. Attendees are required to pre-register.

Jones is the Jerome M. Culp Distinguished Professor of Law and director of the Center on Law, Race, and Politics. Lovelace is professor of law and a John Hope Franklin Research Scholar.

Blackwell, founding partner, CEO, and chairman of Blackwell Burke in Minneapolis, delivered the prosecution’s opening and closing arguments in State of Minnesota v. Derek Michael Chauvin. The trial, broadcast worldwide during March and April 2021, resulted in the conviction of Chauvin, a police officer with numerous misconduct complaints during his 18 year career, for the murder of George Floyd, a 46 year old Black man, on a Minneapolis street on May 25, 2020.

Known for his ability to communicate complicated legal, scientific, and business issues to jurors, Blackwell was one of nine private attorneys on the 13-member prosecution team who donated their time to the case.

He is a prominent civil rights attorney and trial lawyer with nationwide experience defending companies in class actions, toxic tort, commercial disputes, product liability, and other high stakes complex cases and has served as national and trial counsel for major corporations including Walmart, 3M Company and General Mills. A native of Kannapolis, N.C., he received his bachelor’s degree from the University of North Carolina at Chapel Hill and his JD from the UNC School of Law.

Blackwell is a founder of the Minnesota Association of Black Lawyers and the recipient of numerous local, state, and national awards including, along with Blackwell Burke partner Corey L. Gordon, 2020 Minnesota Attorney of the Year, for their work in securing the first posthumous pardon in the state’s history for Max Mason, a Black man wrongfully convicted in 1920 for the rape of a white woman.

UNIV 101 Presents: Race, Policing, and Activism is the first in a series of public events related to Duke’s university course on race, UNIV 101: The Invention and Consequences of Race.