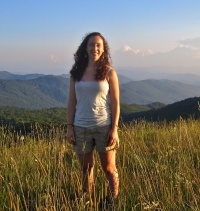 When she began work on her master’s degree in environmental management at Duke’s Nicholas School of the Environment two years ago, Jessalee Landfried had no plans to pursue a law degree. A Durham native who has long planned a career working to improve environmental policy, Landfried says she quickly realized that a JD would be “an amazing tool” in service of her goals.

She has taken to her legal studies with the zeal of a convert, taking the helm of the Environmental Law Society and winning three awards for her scholarship and community service. Last year, Landfried was awarded the North Carolina Women in Transportation's Graduate Student Award and the Durham Bar Association’s Adam Lischer Memorial Scholarship for her work to encourage more bike and pedestrian traffic with a Durham nonprofit, Clean Energy Durham.

“My first year at the Nicholas School — the year before I started Law School — I held a position at Clean Energy Durham where I was a community organizer for transportation projects,” she explains. “I organized community events to encourage people to bike and walk and use mass transit. The biggest of those was called Bull City Summer Streets, and we closed a mile of downtown to cars and opened it up to pedestrians and cyclists. About a thousand people came to that inaugural event. I had to stop working on that when I came to the law school, but they’ve continued, and the hope is that the event, now called Bull City Open Streets, will happen two or three times a year.”

Landfried’s professional interest in greening transportation policy is an extension of her love of her hometown — and her years cycling to high school at the Durham School of the Arts from her south Durham home, a 14-mile round trip.

“I rode my bike on the American Tobacco Trail to school every day, not out of environmental concern, but because I really liked it,” she says. “I always thought bikes were just a great way for people to experience a city. You see so much more, and they’re so much fun.

“That’s the thing about bikes: They’re a great policy choice, but they’re also fun. I love Durham and I think a great way to see it is by bike. Car-centric development — Southpoint would be an example — is sucking the character out of Durham.”

Landfried received the North Carolina Bar Association's Zoning, Planning and Land Use Fellowship for her work on land use projects with the Southern Environmental Law Center and Western North Carolina Alliance.

“In the Southeast, rampant highway building is choking so many of our cities, and SELC has a pretty recent focus on stopping some of the poorly conceived highway projects and encouraging states to be more thoughtful about their transportation future,” she says. “In the spring semester I interned in SELC’s Chapel Hill office, where I helped with litigation regarding bad highway projects. This summer I had a Stanback internship with the SELC and the Western North Carolina Alliance in Asheville where I focused on land use projects, including studying smart growth opportunities for Asheville and also helping with litigation to stop bad highway projects.

“I feel really lucky to be able to work with SELC, whose work I admire and respect so much.”

One of the things she has learned at Duke Law is the importance of good zoning and land use policy, Landfried says.
“A lot of young lawyers think of zoning as a boring topic, but it affects so much about what people actually care about in the places they live and hang out. If you asked my classmates, ‘What do you like about hanging out on Franklin Street or in Durham or your home city?’ at the root of that is the zoning code. It’s dry to talk about, but it has such a powerful effect on our daily lives.”

As president of the Environmental Law Society, Landfried plans to continue the focus on hands-on projects that the society implemented in the last academic year.

“Last year the leaders of the society had us all do a hands-on project, the Environmental Law Project, where, instead of organizing lunch talks and that sort of thing, we did more client-based work. This year we’re trying to expand that and get more people involved. We’re going to be working with the Nicholas Institute to analyze new EPA regulations, working with the Environmental Defense Fund to study approaches to stream pollution, and with the Ellerbe Creek Watershed Association to study land trust law.”

For her part, Landfried intends to stay involved in local environmental matters.

“I grew up here and I really love it and would like to find a way to spend my professional life in Durham and keep working to make it a great place.”