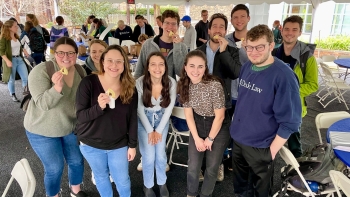 One of the most well-known student organizations at Duke Law, the Jewish Law Students Association is an active, vibrant, and essential group for students who share an interest in Judaism and Judaism-related issues, and offers opportunities for fellowship ranging from lectures and 'lunch-and-learns' to holiday get-togethers and bagel brunches.

For some Jewish students who moved to Durham from out of state, JLSA has offered a sense of home. Courtney Kobren '22, of New York, says she first learned about JLSA while visiting Duke Law at Admitted Students Open House.

"It was important to me to find a community of other Jewish students at whichever law school I chose to attend," Kobren said. "At Duke, I met with members of JLSA who instantly made Duke Law and Durham feel like home."

Kobren went on to serve as a co-president of JLSA, remarking, "I've made some of my closest friends through JLSA. I am so grateful for the community I found here!"

"Moving to North Carolina my 1L year without knowing anyone down here was a daunting transition," he said. "But JLSA made the move comfortable, from the very first JLSA dinner I attended at Admitted Students Open House in 2019."

Many of JLSA's social events provide Jewish students with a way to celebrate cultural and religious holidays, like Hanukkah, Purim, and Shabbat.

In addition to opportunities for connection, JLSA's events have also provided students with a safe space for strength and solidarity. In the wake of 2018's deadly mass shooting, fueled by anti-Semitism, at the Tree of Life Synagogue in Pittsburgh, JLSA held a community event to discuss the attack.

Last month, JLSA partnered with several of the Law School's fellow student affinity groups to hold a lunch-time event analyzing the landmark federal case where more than a dozen top-ranking white supremacists were found guilty of conspiring to intimidate, harass, or commit acts of violence during 2017′s deadly Unite the Right rally in Charlottesville, Va.

"At this moment, when there is increasingly explicit anti-Semitism and bigotry, I think being a Jewish American means committing to combat these injustices for Jews and all people," former JLSA president Ali Rosenblatt '23 said.

"Being Jewish is inextricably tied to what propelled me on the path that led me to law school. Growing up Jewish, I was taught a history of persecution and perseverance, reminded every year at the Passover Seder about 'injustice in our own times.' That was the essence of my Jewish upbringing."

Rosenblatt pointed to a Jewish-American legacy of activism and advocacy as inspiring her to pursue a career in public interest through law school, to realize the principle of Tzedek Tzedek tirdof, or "justice, justice, shall you pursue."

As spring semester winds down, JLSA's leadership is passing the torch to its new board, led by co-presidents Adam Morris '24 and Mark Usatinsky '24, and looking to the future. To find out more about JLSA, visit @dukejlsa on Instagram.

Why is May Jewish American Heritage Month?

Jewish American Heritage Month has been celebrated in May since it was established in 2006 under President George W. Bush. Chosen based upon the successful celebration of the 350th Anniversary of American Jewish History in May 2004, May commemorates more than 350 years of Jewish contributions to American culture in areas including science, medicine, politics, literature, music, film, theater, and television. Initiated by the Jewish Museum of Florida and South Florida Jewish community leaders, U.S. Rep. Debbie Wasserman Schultz (D-Fla.) and former U.S. Sen. Arlen Specter, (D-Pa.) introduced a resolution that passed both houses of Congress unanimously.