In 1937, James Naismith, the inventor of the sport of basketball, met with a couple of cronies in Kansas City, Mo., and organized what would become the longest continuous collegiate hoops tournament in history. Naismith’s creation was neither the National Collegiate Athletic Association (NCAA) tournament that now fuels “March Madness,” nor the less prestigious National Invitational Tournament (NIT). Rather, the eight schools that played in that initial competition were the small colleges that would become the charter members of the National Association of Intercollegiate Basketball (NAIB).

Seventy years later, the tournament still exists, as does the conference now known as the National Association of Intercollegiate Athletics (NAIA), which is headed by Jim Carr ’94. Still based in Kansas City, the NAIA has 287 member colleges and runs 23 intercollegiate sports.

Carr’s vision is to position the NAIA, where he served as counsel for eight years before taking over as president and CEO in 2006, as a smaller, more flexible, and less commercially obsessed alternative to the NCAA. That positioning, Carr says, is crucial to the survival of his association. “The fact is, if we don’t offer a completely different approach to college sports to what the NCAA currently has, there’s no real reason for us to exist,” he says.

Central to Carr’s campaign is his “Champions of Character” program, which stresses five principles that he believes are crucial aspects of competition: sportsmanship, respect, responsibility, servant leadership, and integrity. All NAIA member schools not only teach these values, but also practice them, both on and off the field. “Of course there are exceptions,” Carr says, “but in general our student athletes don’t talk trash to one another, our coaches don’t shout at the referees, and our fans don’t taunt the opposing players.”

In addition, the rule book for the NAIA is noticeably thinner than the NCAA manual. “Theirs is 20 times thicker than ours,” Carr says. “That doesn’t mean that we have lower standards, it just means that we operate under a trust-based system, and that as long as our schools are treating their athletes the way they treat the rest of the student body, they are complying within NAIA rules.”

Carr is the first to admit that the stakes for NAIA schools are not nearly as high as those of many NCAA Division I programs — including Duke’s.

“Of course the big-money, high-pressure programs in Division I universities need to have a more sophisticated and expansive manual,” he says. “The better comparison to make here is with the NCAA Division II and Division III programs, who are not, in general, televised, and whose coaches usually do not have to produce astronomical winning records in order to keep their jobs.” Those schools still have to adhere to the same complex NCAA standards that Division I schools follow, which can be burdensome for the smaller colleges in the association.

Even so, the NAIA has lost a number of members to the NCAA’s second and third divisions over the past decade, a trend that Carr hopes to reverse by increasing his organization’s revenues — not through television contracts and endorsements, but through the financial backing of corporations and foundations.

“We are going to organizations and asking them to sponsor our Champions of Character program because we want to change the direction sports are taking in our society,” Carr says. The Buffalo Funds, an investment management firm located in Mission, Kan., became the program’s first major corporate sponsor earlier this year.

Carr points out that the message of character and courage he is promoting has a long history in his conference. As a young basketball coach at then-NAIA member Indiana State University in 1947, the future UCLA legend John Wooden refused to allow his team to play in the conference tournament until the association allowed African Americans to participate. The NAIA broke the color barrier a few years before the NCAA integrated, and two decades before the Atlantic Coast Conference did so.

John Wooden likely would approve of Carr’s emphasis on character as well as competition, teaching, and coaching in the NAIA. And at least one major NCAA figure has taken notice: At a recent ceremony at West Point, an NCAA Division I school that has adapted the NAIA’s Champions of Character program, Army alum and Duke University basketball coach Mike Krzyzewski presented the first annual “Coach K Teaching Character Through Sport” awards to a coach and a cadet. Carr, who was integral to the creation of the award, notes with pleasure that Duke’s coach epitomizes the NAIA’s vision of a perfect coach — one who emphasizes character and emotional development off the court as well as winning strategies on it.

But if Krzyzewski were ever to switch organizations, he would have to adjust to one more discrepancy between NAIA and NCAA Division I policies: “Most of our schools pay their coaches slightly less than they do their tenured professors,” Carr says. “We’re just on a completely different continuum than big-time Division I schools.” — Paula Edelson 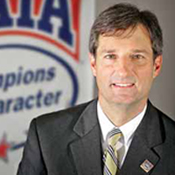