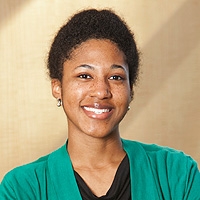 Joanna Darcus ’12 arrived at Duke Law School intent on crafting a career in public interest law.  She hasn’t wavered from that goal, making it her focus in and out of classes and clinics and in her summer jobs.

Her record of sustained service has paid off; Darcus has received a post-graduate fellowship from the Philadelphia-based Independence Foundation to work on issues relating to economic justice.

Working in the Consumer Law Unit of Community Legal Services of Philadelphia, Darcus will defend low-income consumers from predatory debt collection practices, including those relating to private student loan repayment.  Her project is multifaceted, involving direct representation of low-income consumers, building capacity within the private bar to handle consumer defense and assist pro se litigants, and advocating for policy reform initiatives with local and national partners.

Darcus laid the groundwork for her Independence Fellowship project during her 1L summer when she worked on consumer law matters at Community Legal Services of Philadelphia, supported by Duke’s Carroll-Simon Fellowship and as an Equal Justice Works Summer Corps Member.  The work offered her perspective, she said, on the intimidation and confusion experienced by consumers being aggressively pursued, in court and out, by debt collection companies that typically have purchased consumer debts for pennies on the dollar. Many consumers have strong legal defenses, yet few have legal representation, she added.  And in Philadelphia, court dockets are flooded with more than 17,000 debt collection claims per year.

“Without a lawyer, however, many low-income people cannot defend themselves in these actions if they are unaware of the substantive and procedural defenses they could raise,” her project proposal explains, noting additional obstacles faced by elderly, disabled, and non-English speaking defendants.  “Legal services lawyers, already stretched thin by the mortgage foreclosure crisis, can take on only a small fraction of these cases.  As a result, predatory collectors routinely obtain judgments against unrepresented consumers without any proof to support their claims.  These judgments exact a heavy toll on the poor, stripping them of money they desperately need and impairing their ability to obtain housing and employment.”  Students lured into expensive and risky private student loans for attendance at for-profit schools comprise an important subset of these consumers, she said.

“We know from Joanna’s phenomenal work as a law student in our consumer unit that she will be an extraordinary public interest lawyer. She has the commitment, energy, and talent to make this project a success. We cannot wait for her to begin.”

Darcus’s post-graduate project represents a facet of her broader interest in community development and how wealth can be built and sustained in lower-income communities.  That interest also motivates her to help low-income taxpayers prepare their returns; she has volunteered annually with the Volunteer Income Tax Assistance program (VITA) almost continually since her undergraduate days at Williams College.

“VITA is one of the ways in which I first connected to the idea of helping people keep what’s theirs,” she said.  “Low-income workers often are primary targets of commercial tax preparers who offer refund anticipation loans and who often will take a percentage of the refund as their payment instead of just taking a flat rate.  That means they get a larger chunk of the amount the taxpayer gets back through the Earned Income Tax Credit, and those taxpayers, who need the tax credit the most, end up paying the most for tax preparation services.

“So by offering free tax preparation services, we can make sure $400 or $500 doesn’t just end up with a commercial tax preparer,” she said.  “I get a little fired up about making sure that people of limited means get to keep their money to pay their bills, to pay their rent, and to save for their kids’ futures.”

Prior to enrolling at Duke, Darcus worked at the Juvenile Law Center in Philadelphia, helping to represent children in the foster care and juvenile justice systems.  During her 2L summer, she worked for the Community Development Project of the Lawyers’ Committee for Civil Rights Under Law in Washington, D.C., supported again by the Carroll-Simon Fellowship.

“We primarily acted as general counsel for nascent nonprofits located in the Gulf Coast of Mississippi and in New Orleans, where we also focused on affordable and fair housing issues in partnership with local organizations,” she said.  “I was working with nonprofit clients for the first time and we did some board development, commented on bylaws and articles of incorporation, and helped clients with the process of obtaining nonprofit status.”  Darcus will deepen her transactional skills when she joins the Community Enterprise Clinic in the spring 2012 semester; she also has taken part in the Children’s Law Clinic and the clinically oriented Human Rights Advocacy seminar.

Darcus has been an Innocence Project leader throughout her time at Duke Law; currently its managing director, she served on an investigatory team and as outreach coordinator as a 1L and as a case manager in her second year.  Her commitment to investigating inmates’ plausible claims of innocence fits with her determination “to make sure that people aren’t deprived of what’s rightfully theirs and that their rights don’t get trampled,” she said.  “If someone is actually innocent, then I want to make sure they are not serving a sentence for a crime they didn’t commit.  There is definitely a role for investigating claims of innocence and making sure that justice was served.”

“As one of the leaders of the Innocence Project, Joanna Darcus has demonstrated her remarkable commitment to matters of social justice -- and her equally remarkable effectiveness,” said Clinical Professor Theresa Newman ’88, one of the Innocence Project’s faculty advisers. “With quiet resolve, she applies her keen intelligence and impressive skill to matters of importance and urgency, and she inspires others to join her in the effort as she works toward improvement. She accomplishes a tremendous amount but does so with great humility, generosity, and genuine kindness, always remembering to thank others for their contributions and demanding so little recognition herself. For Joanna, a job well done is one for which credit is shared among everyone involved.”

“And it wasn’t just that public interest careers were possible, but that Duke made resources available to help.  I think it’s fantastic that both summers I was able to get funding from Duke to do the work that I otherwise wouldn’t have been able to afford to do.  Duke’s generous LRAP program is another push ­– another way that Duke really makes it possible to pursue public interest careers.”