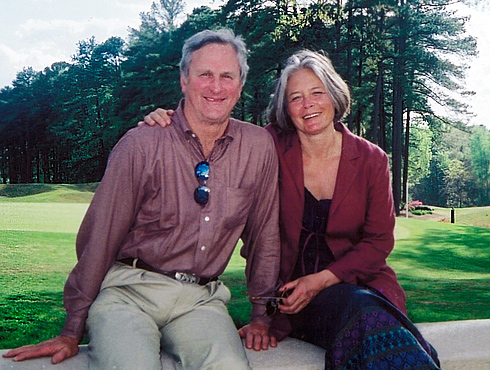 “We have had 40 years of incredible laws that have protected us. ... And we’re now ready ... to work at protecting these laws when we’re faced with the next challenge. it’s time for another lesson in the importance of the clean Air Act and the clean Water Act, and that’s what we’re up for.”

President Barack Obama announced Nov. 17 that John Adams ’62, the co-founder of the Natural Resources Defense Council, would receive the 2010 Presidential Medal of Freedom, the country’s highest civilian honor. “His tenure is unparalleled by the leader of any other environmental organization,” the president said in making the announce¬ment. He also quoted Rolling Stone magazine’s assessment of Adams’ work: “If the planet has a lawyer, it’s John Adams.”

A day earlier, John and Patricia Adams were at Duke Law School to talk about the evolution of the NRDC from a homegrown environmental advocacy group, which they founded in 1970 in the earliest days of American environmental law, to an organization with 1.3 million mem¬bers, 300 employees, and international reach. John Adams served as NRDC’s executive direc¬tor and, later, its president until 2006.

John Adams is a life member of the Duke Law Board of Visitors and a member of the Board of Visitors at Duke’s Nicholas School of the Environment. Patricia Adams is a teacher, author, and steering committee member of NRDC’s Partnership for the Earth campaign. The couple co-authored the memoir A Force for Nature: The Story of the NRDC and the Fight to Save Our Planet. Excerpts from their conversation with Professor James Salzman and Duke students follow.

When a senior partner at Simpson Thacher & Bartlett proposed creating a public interest law firm for the environment, John and Patricia welcomed the often daunting challenge, in which they were joined by a group of Yale-trained lawyers. By that time, John had been an assistant U.S. attorney for more than four years, having earlier worked on Wall Street.

Patricia: It was a time when people were talking about equality and equal rights. And there was the question: Do we have an equal right to clean air and clean water? Because during the ’50s, in particular, if a highway had to come through or a [manufacturing] plant needed to be built, that was for the good of the whole and the individuals just had to move over.

John: We knew that we both cared about the things we were talking about and what we saw that it might lead to — our version of working [and] living in nature, and being a part of the protection of nature, which has been sort of paramount to my view of all of the things that we have worked on.

Funded from the start by the Ford Foundation and always focused on building its membership, the NRDC spent its early years shaping the Clean Air Act, the Clean Water Act, and statutes “that were just written as we arrived on the scene,” said John.

John: The first decade was basically all about building laws, rules, and regulations. [We] quickly realized that we had a niche that was really valuable. And funders saw it, too. They were supporting our efforts to make the systems with public lands, clean air, and clean water work better by getting really good rules and really good regulations. Of course, they would be challenged — and we would challenge back. We brought law¬suits if we didn’t think the regulations were good. I think if you read NEPA [the National Environmental Policy Act], during its first five or 10 years, every case is NRDC versus whoever the administrator was at the time. And that became a very, very important part of the strength of NRDC— we “owned” those statutes, [until we] didn’t need to liti¬gate as much.

Patricia: The phrase was, “NRDC is a shadow of EPA.” … The laws were new, NRDC was new and everybody at that point was somewhat working together. And EPA also agreed that sometimes the lawsuits helped them enforce the laws.

John: With the Clean Water Act, we sent out a group of scientists to look at the per-mits. We found out that the permits were just baloney — nobody honestly filled out permits. So we started surreptitiously testing waters up and down rivers through the East and the West and the Midwest, and then we brought hundreds of lawsuits against the companies for violations of the permits. We brought more lawsuits on water permits than EPA and the Department of Justice combined. And that changed the permitting system. And we were soon able to give that up, because we couldn’t find as many viola¬tors. It wasn’t worth fishing in those waters. 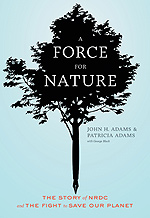 A “defining moment” for the NRDC came in 1989, with the publicity surrounding its report on pesticides in food titled “Intolerable Risk.” The report sparked intense public interest and controversy in its finding that dangerous — even illegal — pesticides were prevalent on produce, and that children were exposed to substantially more pesticides per pound in body weight than the tests showed. Alar, a chemical commonly used on apples, was of particular concern and gained considerable media coverage.

John: The next thing we knew, we had 35,000 people clamoring to find out whether their food was safe. We got sued for millions of dollars [by] the apple growers. It was a huge case … it was actually one of the few times I was worried about a lawsuit. …

The case was finally dismissed, Alar was pulled from the market by the manufacturer, and two studies by the FDA and EPA found that Alar continued to be a risk and recommended that it be pulled for use on food. So it all worked out very nicely. We got a lot of members.

[W]e are the study in business schools on how to make a big mistake in public rela-tions. … But guess what happened? We now have organic food everywhere. It was literally recognized as the starting point of a major move to healthy foods. So I’m very proud of the Alar case, even though I wish we had handled it a little bit better.

Recalling the successful campaign by NRDC and allies to stop a 1995 rollback of environmental laws threatened during the 104th Congress, a victory they call “the single most important environmental victory in United States history” in their book, the Adamses offered counsel for the present.

John: People have very short memories. They don’t understand why it’s important to have clean air and clean water and all of these things. They say it’s too expensive and things like that. It’s not expensive. America is so lucky that we have clean air and clean water, and that we have a Clean Air Act that is now going to help us fight the carbon fight. You can’t imagine what strength it gives us. And I know a lot of people are wor-ried about America’s environmental laws right now. …

We have had 40 years of incredible laws that have protected us. That’s a lot to build off. But our job is not to let those laws be damaged. And we’re now ready … to work at protecting these laws when we’re faced with the next challenge. It’s time for another les¬son in the importance of the Clean Air Act and the Clean Water Act, and that’s what we’re up for.

John Adams noted his pride in and affection for Duke, saying it’s made “a huge difference in the environmental world” through the work of many of its graduates, including his friend and classmate Jim Moorman ’62, the first president of the Sierra Club Legal Defense Fund. He urged the young lawyers in his audience to get involved in environmental issues, highlighting the great need for effective advocacy.

John: Every single community [needs] volunteers who can really do things. … And that’s something we’ve been able to enhance, in all the communities that we have lived in, and that’s been very, very rewarding. And, of course, that’s where our friends are now. They are people who have been out doing the same things — trying to make the place a little better.

I think Duke is a place that tells people they can go out and have a big impact if they want to. I certainly feel that it helped me a lot in getting my first job (even though I didn’t like it). … And then going to the U.S. Attorney’s Office and getting that litigation experience and working with really smart people who were really smarter than I was, and taking advantage of their skills and then taking that to NRDC— it was a very power¬ful way to build a life and a career.