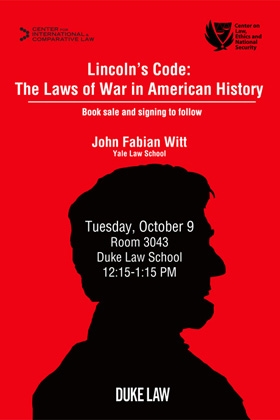 Join Yale Law Professor John Fabian Witt for a lunchtime lecture as he discusses his newly published book, "Lincoln's Code: The Laws of War in American History." Book sales and signing will follow. This event is cosponsored by CICL and LENS.

In the fateful closing days of 1862, just three weeks before Emancipation, Abraham Lincoln's top military advisors commissioned a code of rules to govern the armies of the United States in a newly intensified war effort. The code Lincoln issued the next spring helped shape the remaining two years of Civil War. Its rules on torture, prisoners of war, assassination, and more quickly became foundations of the modern laws of war and today's Geneva Conventions. Yet the hidden story of Lincoln's code, and of the decades of controversy that lay behind it, has never been told.

In this masterful and strikingly original history, John Witt charts the alternately troubled and triumphant course of the laws of war in America from the Founding Founders to the dawn of the modern era, revealing the history of a code that reshaped the laws of war the world over. Ranging from the Revolution to the War of 1812, from war with Mexico to the Civil War, from Indian wars to the brutal counterinsurgency campaign in the Philippines, Witt tells a story that features presidents as well as men in the throes of battle, one that spans war-makers and pacifists, Indians and slaves. In a time of heated controversy about the nation's conduct in the war on terror, Lincoln's Code is a compelling story of ideals under pressure and a landmark contribution to our understanding of the American experience.

John Fabian Witt is Allen H. Duffy Class of 1960 Professor of Law at Yale Law School. He writes in the history of American law and in torts, including Lincoln's Code: The Laws of War in American History (Free Press, September 2012), Patriots and Cosmopolitans: Hidden Histories of American Law (Harvard University Press, 2007), and the prizewinning book, The Accidental Republic: Crippled Workingmen, Destitute Widows, and the Remaking of American Law (Harvard University Press, 2004), as well as articles in the American Historical Review, the Columbia Law Review, the Harvard Law Review, the Yale Law Journal, and other scholarly journals. His writing has appeared in The New York Times, Slate, and The Washington Post and he has been a guest on NPR's All Things Considered. In 2010 he was awarded a John Simon Guggenheim Memorial Foundation Fellowship for his project on the laws of war in American history. Professor Witt is a graduate of Yale Law School and Yale College and he holds a Ph.D. in history from Yale. Before returning to Yale, he was the George Welwood Murray Professor of Legal History at Columbia University. He served as law clerk to Judge Pierre N. Leval on the United States Court of Appeals for the Second Circuit.