“For years, I heard lawyers promise judges:  ‘I’ll be brief’ ─ and then go on and on,’” he explains. “I resolved to skip the promise, try my best to be brief, and savor the relief on judges’ faces.”

In fact, it’s impossible to imagine Wester wearing on an audience, in court or out.  He is a natural storyteller ─ and his full-blooded experience with the law provides plenty of material.  There is the one about his arguing, at age 33, for Ford Motor in the U.S. Supreme Court; another about representing North Carolina’s Governor and cabinet secretaries in a class action challenging the constitutionality of employment practices in the state.  Then there’s the one about how, after a typically rough game for Duke Law’s football team, he wound up in Duke’s emergency room getting stitches in his chin while his friend and teammate, Joseph McManus ’72, lay beside him getting stitches in his chin.  “’You two are going to be lawyers?!?’” Wester recalls the nurse asking.

For Wester it was the camaraderie, more than his love of football, that resonated.  He has spent his career building and fostering communities:  from family to college and law school, to Robinson Bradshaw & Hinson, the law firm where he has practiced for his entire career, to legal aid groups in Charlotte, and, as president of the North Carolina Bar Association from 2009-2010, the North Carolina legal community as a whole.

“He’s a super smart, accomplished lawyer,” says friend and classmate Thomas Sear ’72 of Jones Day in New York.  “But the really special thing about John is the way he relates to people.”

It was Wester’s collegiality that led to his two-decade involvement in Hyatt v. Shalala. Soon after his experience in the Supreme Court, he represented the Charlotte-Mecklenburg Housing Authority in a series of cases, arguing again and again against the attorneys from Charlotte’s Legal Aid office.  “I lost nearly every case against them, and then we’d go out afterwards for drinks and dinner,” he recalls.  “I learned so much from them.  We became good friends.”

A few years later, Legal Aid saw a rapidly growing number of disabled clients losing or being denied Social Security benefits.  The Legal Aid team decided that a class action would be needed to challenge an internal ruling issued without notice by the Social Security Administration.  Although the U.S. Court of Appeals for the Fourth Circuit had ruled in favor of similarly situated plaintiffs, the SSA had refused to follow this precedent.  To take this on, Legal Aid turned to Wester and his firm, asking them to become counsel pro bono publico.

Wester and his partners handled the case for almost 20 years, through numerous hearings, a trial, five arguments before the Fourth Circuit, and two petitions for certiorari to the Supreme Court.  As a result of this litigation, more than 50,000 disabled North Carolinians received disability benefits.  The case also contributed to similar relief in other states and to a revised Social Security regulation for disabling pain.

The case won Wester and his firm accolades along the way:  the American Bar Association awarded Robinson Bradshaw & Hinson its inaugural public interest law award.  But for Wester, the most meaningful moment came at a recess during trial.

“A gentleman tapped me on my shoulder to introduce himself.  ‘Mr. Lawyer,’ he said, ‘I want to know how you think it’s going.’  I shook his hand, told him I didn’t know, and added:  ‘I’d like to know how you think it’s going.’  He answered:  ‘Mr. Lawyer, I’m almost deaf, so I can’t hear much of what y’all are saying. But I know what you’re doing, and I know what you’re getting paid for doing it.  And I just want to thank you.’”

When the court awarded fees in the case (nearly $500,000), Wester and his partners agreed unanimously to donate all the fees to the Mecklenburg County Bar Foundation.  Throughout the case, Wester was motivated by the knowledge that there were thousands of “clients” counting on him, his partners, and Legal Aid – all lawyers they had never met. “For good reason, we are wary of elitism,” Wester points out, “but we cannot overlook the very precious implements that only lawyers can wield.”

Looking at his career, one likely explanation for Wester's achievements as a litigator and his appeal as a friend and colleague is his genuine affection for the communities he has helped to build.  Duke Law School ranks high among them.

“Duke Law is the foundational community for me as a lawyer,” he says. “For that, I am most grateful.  The richly diverse mix of excellent faculty all under one roof was simply stunning.”

Wester attended Duke on what he calls the “John and Louise Wester Scholarship.”  He has recently decided to honor his parents by donating funds to the law school to make his “scholarship” official, and as he told his mother, last Mother’s Day, it will be called the “Louise Robbins & John Howard Wester Scholarship Fund.”  In doing so, Wester honors several of the communities he holds dear:  his family, Duke Law School, and the future legal community in North Carolina and beyond. 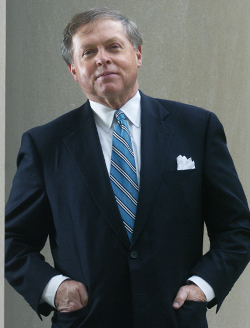