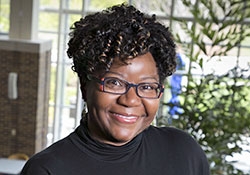 “I’m am deeply honored to receive this award,” said Jones, a member of the Duke Law faculty for more than two decades. “I have always enjoyed interacting with Duke Law students and teaching has been the highlight of my professional career.”

The D.O.N.E Awards, presented by the Duke Bar Association, recognize student organizations, student leaders, and faculty who make significant contributions to the community and academic experience at Duke Law. Nominations and feedback are solicited from the entire student body, and winners are finalized by a committee of students representing the classes of 2019, 2020, and 2021.

The Distinguished Teaching Award, which is accompanied by a stipend supported by the Class of 1967, has been given annually since 1985. Recipients serve as faculty hooders at the Law School’s graduation ceremony in the year that they won and the year after.

Jones, who joined the Duke Law faculty in 1995 after working as a commercial litigator in Washington, D.C., teaches Civil Procedure, Employment Discrimination, Race and the Law, and Critical Race Theory. From 2008 to 2011, she served as a founding member of the faculty at the University of California, Irvine, School of Law, where she created and directed the Center on Law, Equality and Race. She focuses her research and writing on racial and socioeconomic inequality.

“I can’t imagine anyone more deserving of this award than Professor Jones,” said Kerry Abrams, James B. Duke and Benjamin N. Duke Dean of the School of Law. “She is extraordinarily devoted to her students both inside the classroom and out. I have heard repeatedly from students and alumni about the enormous difference she has made in their lives and careers.”

Students who nominated Jones for the award praised both her teaching style and her willingness to provide mentorship and help.

“[Jones] garners a level of trust and respect in her classroom that I have never experienced before,” wrote one student. “She cultivates authentic and real conversations that engage the material and also look forward to solutions. She always reminds us of our role as future lawyers and law shapers, allowing us to reflect on our world and our role within that world.

“She is an invaluable asset to not just the Law School and Duke as institutions, but also to her students both as professionals and as people. She sees all of our potential and offers any support she can to help us reach that potential.”

Jones said that teaching had never been her ambition, and that when she entered the profession, she drew on the influence and inspiration of three of her own professors at Cornell University and the University of Michigan School of Law to help her “figure out what the heck I was doing and how I wanted to do it.” She noted that her students have also taught her a great deal, challenging her and broadening her perspective.

“In return,” Jones said, “I hope that I have taught you to imagine – to imagine yourselves doing what might seem unimaginable, to imagine the world as you want it to be, not as it is, and to imagine using the law (and every other means at your disposal) to make that world our collective reality.”