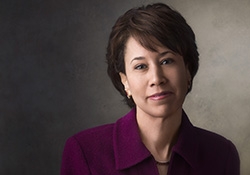 Judge Allyson K. Duncan ’75 of the U.S. Court of Appeals for the Fourth Circuit will address members of the Class of 2019 at their Graduation Convocation on May 11.

Duncan, who has held her seat since August 2003, is the first African-American woman to sit on the Fourth Circuit bench. She announced last year that she would retire from her judgeship as soon as a replacement has been confirmed.

A Durham native, Duncan clerked for Judge Julia Cooper Mack on the District of Columbia Court of Appeals before joining the U.S. Equal Employment Opportunity Commission as an appellate attorney, rising eventually to agency counsel. She later taught law as an associate professor at North Carolina Central University and served as a judge on the N.C. Court of Appeals and as a commissioner on the N.C. Utilities Commission before joining Kilpatrick, Townsend and Stockton in Raleigh as a partner.

Duncan was nominated to the federal judiciary by President George W. Bush and confirmed by a unanimous vote in the U.S. Senate. She is vice president of the International Association of Judges (IAJ), an organization composed of more than ninety countries based in Rome; a past president of the Federal Judges Association; and past chair of the International Judicial Relations Committee of the U.S. Judicial Conference by appointment of U.S. Chief Justice John Roberts.

“Duke Law is deeply honored to have Judge Allyson Duncan as our distinguished speaker at this year’s Graduation Convocation,” said Kerry Abrams, James B. Duke and Benjamin N. Duke Dean and professor of law. “Through her long career on the bench, in the courtroom, and in the classroom and her service to her country, Judge Duncan has provided an example of a life devoted to the rule of law. I can’t think of a more inspiring person to speak to our graduates as they set off on their own legal careers.”

Duncan is a member of the Duke University Board of Trustees, on which she chairs the Graduate and Professional Education Committee and serves on the Executive Committee, and the Duke Law Board of Visitors. She and her husband, former U.S. Magistrate Judge William Webb, established the Judge Allyson K. Duncan Fund in support of legal writing at the Law School. At an Oct. 26 event, a portrait of her was unveiled that now hangs outside the James M. Poyner Moot Courtroom.