Testimony has been suspended in a long-running court case in light of a major development favorable to a Duke Law clinic client: revocation of the certification the client had sued to overturn.

On Dec. 1, the North Carolina Department of Environment and Natural Resources (DENR) revoked a certification essential to Alcoa Power Generating, Inc.’s renewal of a 50-year license to operate dams on the Yadkin River. Duke’s Environmental Law & Policy Clinic has been working for two years on behalf of their client, Yadkin Riverkeeper, to convince the state to deny Alcoa the certification.

Testimony and e-mails introduced by Clinic Director Ryke Longest and the other lawyers working on the case persuaded DENR to issue the Dec. 1 letter officially revoking the certification they granted in May 2009, over the objections of Yadkin Riverkeeper and others. In the letter, DENR Division of Water Quality Director Coleen Sullins cites testimony that, she writes, clearly shows that Alcoa “intentionally withheld information material to determining the project’s ability to meet the state’s water quality standards for dissolved oxygen.”

Administrative Law Judge Joe Webster has been presiding over hearings regarding the certification since September. Longest and clinic students from the Law School and Duke’s Nicholas School of the Environment have prepared and presented legal and scientific arguments to show that the state violated the Clean Water Act and the North Carolina Environmental Policy Act and the state’s rules in granting the certificate. 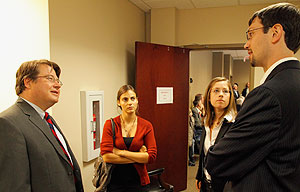 Clinic Director Ryke Longest discusses legal strategy with clinic students during a break in the hearings.


“Under the Clean Water Act, the State of North Carolina has a responsibility to restore degraded waters, such as those found in the Yadkin River basin,” said Longest.

Longest told clinic students about the letter during their last class of the semester.

“I’m excited the students have had the opportunity to participate in these hearings and see how that process can bring the truth to the fore,” Longest said. “We’ve been working on the issue for two years, but I’m especially excited for the eight students who worked on this case for Yadkin Riverkeeper this semester. They all had an opportunity to do meaningful work, and to have a favorable development like this on the last day of the semester is a rare opportunity.”

In addition to mastering the specific issues involved in the case and helping him prepare for the hearing, Longest said he was pleased that students had an opportunity to observe the courtroom style of other seasoned trial attorneys who also worked on the case, such as Thomas N. Griffin III from Parker Poe, and Jim Conner from Ragsdale-Liggett.

“Students learned a lot about professional courtesy, about the importance of developing a rapport with everyone in the courthouse, and about patience, especially when dealing with public records requests,” Longest said.

Webster heard arguments on Sept. 10 from all parties on each party's motion for summary judgment. Third-year students Adrian Broderick, Greg McDonough and Andrei Mamolea appeared on behalf of Yadkin Riverkeeper under Longest's supervision. They presented portions of the rebuttal on behalf of the Riverkeeper.

"We have had a lot of exposure to both trial preparation and the unpredictability that arises when you take all that preparation to court," said Broderick. "It has been exciting to watch the trial progress and to participate as new issues arise."

On Sept. 15, Judge Webster issued an order denying all party's motions for summary judgment, and hearings on the recertification began on Sept. 27. Later on, students Hillary Bunsow and McDonough examined witnesses on direct examination.

After DENR’s letter was issued, Judge Webster adjourned court testimony until January. In the interim, Alcoa will decide its response to the revocation.

"The opportunity to argue a motion in court, examine witnesses, and watch as a trial unfolded was exciting -- nerve-racking even," McDonough said. "More importantly, though, I was able to implement trial strategies that we discussed over the semester and receive feedback on my performance. You can learn a lot in a classroom, but practical experience is where skills are built."