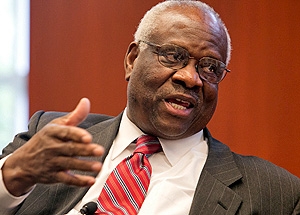 Associate Justice Clarence Thomas invoked the memory of his grandfather multiple times as he told Duke Law students about his journey from the segregated South to the U.S.. Supreme Court dur­ing a recent visit to Duke Law.

During a wide-ranging “Lives in the Law” interview conducted by Dean David F. Levi on Oct. 21, Thomas said his grandfather influenced his thinking in every respect, including in matters of judicial philosophy. “There was a way he told us to think about things and be honest,” said the justice, who was raised by his grandparents after spend­ing his early childhood in an impoverished tenement apart­ment in Savannah, Ga. “I have met a lot of people in my life. I still think, without any doubt, my grandfather is the greatest single human being I’ve ever met or read about. And my grandmother is as saintly a human being as I’ve ever met or read about.”

His 1991 nomination to the Supreme Court by President George H. W. Bush “was their victory,” Thomas said. “It was because of their hopefulness that I was able to be at Kennebunkport,” the location of the Bush summer home where the nomination was announced.

Thomas met with several student and faculty groups dur­ing his daylong visit to Duke, even conferring, over lunch, with Duke men’s basketball coach, Mike Krzyzewski. “We straightened out some theories of motion offense,” joked Thomas, a self-described sports fan.

Thomas, who kept the students in the capacity audience laughing through many parts of his Lives in the Law inter­view, chatted with them informally for more than an hour during a subsequent reception in Star Commons.