Supreme Court Associate Justice John Paul Stevens, who retired in June 2010 after 35 years on the high court, will be the speaker at Duke Law’s annual hooding ceremony honoring the Class of 2012.

Stevens was nominated to the court by President Gerald Ford to fill the seat of Justice William Douglas, who retired in 1975. Stevens had previously served as a judge of the United States Court of Appeals for the Seventh Circuit (1970 to 1975); he also had a law practice in Chicago and taught at the University of Chicago and Northwestern University law schools.

A Chicago native, Stevens holds an A.B. from the University of Chicago and a J.D. from Northwestern University School of Law. He served in the United States Navy from 1942 to 1945 and was a law clerk to Supreme Court Justice Wiley Rutledge. He was admitted to law practice in Illinois in 1949.

“It will be an honor to welcome Justice Stevens to Duke, for all of us at Duke Law School and for me personally,” said Dean David F. Levi, also a Chicago native. Levi’s father, Edward H. Levi, served as United States Attorney General in the Ford administration at the time that Justice Stevens was nominated to the Supreme Court. “Justice Stevens is one of the great figures in the law, and is also a delightful person. Having him speak to us at the hooding ceremony will be very special for the members of our graduating class and their families.” 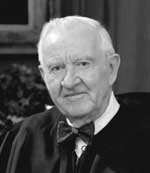