To Katie Ertmer ’13, the phrase ‘sustainable development’ is not an oxymoron.

A city planner in Yuba City, Calif., before she entered law school at Duke, Ertmer had to balance the development needs of her northern California community with the preservation of its surrounding natural environment.

“If development is done the right way it can be a really exciting thing,” she says, though she notes that doesn’t mean it’s easy or instant. “Yuba City is this growing city, and anytime that you have a growing city there are a lot of growing pains.”

Now spending her 1L summer working for Duke’s Office of Counsel, Ertmer hopes eventually to fuse her city planning and development expertise in a focus on environmental policy in public or private practice. “Ideally, I would like to be advising clients that do the type of development that’s good for the community and the environment all at the same time,” she says.

An Illinois native, Ertmer says she “kind of fell into city planning” during summer internships in the mayor’s office of her hometown of Freeport.  She landed her first planning job with Marysville, Calif., after graduating from the University of Illinois with degrees in political science and anthropology.  She earned a master’s degree in public administration from the University of Southern California while working in Yuba City.

Ertmer became Yuba City’s sustainable development specialist after being introduced to the Leadership in Energy and Environmental Design program (LEED) at a green building conference in Chicago.  The LEED program is a system of evaluating and certifying a building’s level of efficiency in terms of energy and water use and other markers of sustainability; developers must take into account every aspect of the building process, which Ertmer oversaw.

“Yuba City was interested in having someone on staff that could help developers implement these principles, even if they didn’t want to go through the certification process,” she explains. “The construction process has to be clean, developers have to divert stuff to recycling programs and use locally sourced materials. There are also points given for efficient air-conditioners, solar panels, low-flow toilets, site selection and even the materials used in the carpet and counter tops.”

While it can be more expensive than conventional construction, it is generally cost efficient in the long run, Ertmer observes.   “A lot of proponents of it say it might cost more in the short term to pay more for this upgraded air conditioning system, but if you’re in the building for ‘X’ number of years it pays for itself,” she says.  She enjoyed overseeing large developments that implemented the LEED process, such as a supermarket that built bike lockers in the store to promote greener transportation methods for its customers.

With a keen eye for development, Ertmer says she was pleased to note Duke Law School’s LEED certification when she visited as a prospective student.  Innovative development in downtown Durham, such as the renovated American Tobacco Campus, also left an impression on Ertmer and her husband, Nick, a developer. “The thing I liked [about ATC] was the adaptive reuse ― taking something old and turning it into something new ― instead of tearing it down or building a whole new development,” said Ertmer. “It [Duke] had the whole package I was looking for; a nice city to live in, a good engaged faculty, and brilliant students.” 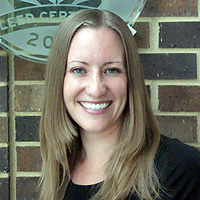