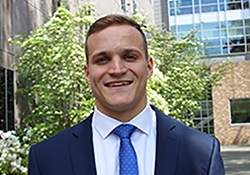 Eric Knapp ’18 will enter federal government service through the U.S. Department of Transportation’s (DOT) Legal Honors Program in the fall. Working out of the agency’s Washington, D.C. headquarters, Knapp will spend one to two years rotating through different DOT sections, including the DOT’s Office of General Counsel, gaining exposure to the agency’s practice of administrative, aviation, litigation, environmental, constitutional, torts, legislation, labor and employment, and contract and procurement law.

Entering government service through acceptance to the highly competitive Legal Honors Program fulfills a longstanding goal for Knapp, who prepared with coursework, a 2L summer position at the Federal Communications Commission (FCC), and an externship with the Federal Trade Commission (FTC) during a third-year Duke in DC semester.

“I was ultimately drawn to public service in the federal government because it can address problems and help people on a large scale,” said Knapp, a Memphis native, who held summer jobs at a homeless shelter and substance abuse clinic during his undergraduate years at University of Mary Washington,  and volunteered at the nonprofit Rappahannock Legal Services after graduating with degrees in Psychology and Religion.

At Duke Law, Knapp developed strong interests in administrative law, business law, and antitrust law, calling Professor Stuart Benjamin’s Administrative Law class and Professor Barak Richman’s Antitrust Law particularly inspiring. “And I learned that I find some of the more technical issues very interesting,” said Knapp. “Because of Professor Benjamin’s work with the FCC, he could talk a lot about how the sausage is made, and that was fascinating. I think it will be valuable when I start working for the DOT.”

Benjamin, the Douglas B. Maggs Professor of Law and Associate Dean for Research, served as the FCC’s first Distinguished Scholar from 2009 to 2011.

During his 2L summer, Knapp worked in the FCC’s Pricing Policy Division, writing comment summaries for notice-and-comment rulemaking, and drafting rules and orders, and decided to follow up with a full-time Duke in DC externship supplemented by a course in federal policymaking. Randall Weinsten ’09, a staff attorney in the Health Care Division of the FTC's Bureau of Competition, was instrumental in helping him secure and succeed in his externship with the agency, Knapp said.

“Randall helped me prep for the interview, and when I got there, he took me under his wing and was a great mentor. He would give me assignments and would go over my work with me. He helped me develop a structure for thinking about how to constantly improve my writing.”

Knapp said his Duke in D.C. experience allowed him to polish his professional skills, network, and deepen his understanding of how government agencies operate and how policy is made.

Assistant Dean for Public Interest and Career Development Stella Boswell said Knapp’s singular focus on securing a government position was the key to his success in the DOT Legal Honors application process.

“Eric definitely demonstrated a critical commitment to government work,” she said. “All candidates for government Legal Honors positions have to be successful academically, but his summer job with the FCC, his Duke in D.C. experience, and a public interest job with Legal Counsel for the Elderly his 1L summer also would have factored into his success.”