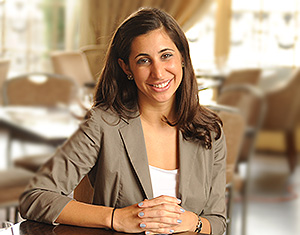 Hearing the story of one 14-year-old boy helped turn Lauren Fine into a social entrepreneur dedicated to making sure children have a voice within the criminal justice system.

Charged with murder, the boy was tried as an adult in a Pennsylvania court, convicted, and sentenced to life without parole — at the time a mandatory sentence in Pennsylvania for a juvenile convicted of a homicide. It appalled Fine, who was then working with children in foster care, in homeless shelters, and in court as a Zubrow Fellow at Philadelphia’s Juvenile Law Center (JLC).

“No one talked about how this boy had been abandoned by his mother,” she recalls. “No one talked about how his father was in prison, and how he had been in and out of foster care and group homes his whole life, how he’d been sexually abused, and forced to fight other foster children for sport. He was finally taken in by a gang member and that was the first stable adult role model in his life.”

Now Fine has launched the nonprofit Youth Sentencing and Reentry Project (YSRP) to make sure that every child’s story is heard in court and beyond. Fine and her partner in the venture, attorney Joanna Visser Adjoian, were named 2014 Black Male Achievement Fellows by Open Society/Echoing Green, and were awarded seed money to establish YSRP. They took on their first cases in early December, focusing on providing training and support to court-appointed attorneys who lack the time or monetary resources to prepare mitigating evidence. YSRP’s goal: to remove young people’s cases from the adult criminal justice system, or to get shorter and more rehabilitative sentences for those cases that cannot be removed.

Shortly after meeting in a Philadelphia coffee shop in 2011 and discovering their shared passion for juvenile justice, Fine and Visser Adjoian began developing the concept for YSRP. Fine, at JLR, and Visser Adjoian then associate director of the Toll Public Interest Center at the University of Pennsylvania Law School, and both were spending time with lawyers and mitigation specialists who worked on death penalty cases. “We were struck by how valuable mitigating evidence could be for a defendant in death penalty cases,” says Fine. “We wanted to provide that kind of evidence to every juvenile case we could.”

They laid the groundwork for their venture by consulting with attorneys, social workers, academics, and other experts in juvenile and criminal law, as well as with people who had gone through the justice system themselves.   They became convinced, Fine says, that mitigating evidence should include a glimpse into a youth’s future as well as that individual’s past. YSRP is rooted in this concept: that presenting a young person’s entire story at trial along with a clear, supported path for re-entry will reduce prison sentences and recidivism.

A Philadelphia native who has been involved in children’s advocacy since high school, Fine entered law school hoping to reform the juvenile justice system.  At Duke she worked in classes, clinics, and summer fellowships on a variety of children’s legal issues, from school discipline and special education cases, to assuring health care access. In her post-graduate fellowship at JLC, she worked with children in homeless shelters, in foster care, and in detention centers, and says she “saw how those systems intersected, and how they seemed to feed into each other.”

Fine and Visser Adjoian have found support for their venture from lawyers familiar with the juvenile justice system as well as from public defenders who routinely offer mitigating evidence in court.  Fine is also networking with groups that offer specialized services and life-skills programs to disadvantaged youth as well as to young adults who are reentering society from incarceration in their early to mid-twenties. She and Visser Adjoian hope to develop these resources both for their own clients and to share with other jurisdictions.

Fine says interest in their services has been strong from the court-appointed lawyers they have approached.  “We’d love to take on every case that needs help, but it is vital to provide individualized attention,” she says, adding that she and Visser Adjoian are actively recruiting student volunteers from local law schools and social work programs in order to be able to take on more cases. While mitigating evidence is often provided by social workers, Fine believes that journalists and sociologists could also make powerful contributions to her cases and hopes to connect YSRP with graduate students and programs in those disciplines as well.

The need for YSRP is particularly acute in Philadelphia, she says, noting that Pennsylvania has more individuals serving mandatory life without parole sentences for crimes committed before they turned 18 than any other U.S. state. “Pennsylvania has the worst record, and we think this is where we’ll have the most impact,” she says. YSRP’s goals will be aided, she adds, by the Supreme Court’s 2012 ruling in Miller v. Alabama, which declared unconstitutional any mandatory sentence of life without parole for a juvenile defendant and set out mitigating factors for judges to consider in sentencing.

Fine and her partner are unusual even for social entrepreneurs in the ultimate objective for their startup. “We hope to put ourselves out of business,” she says. “We hope our work will inform decision-makers so young people are no longer charged as adults.”