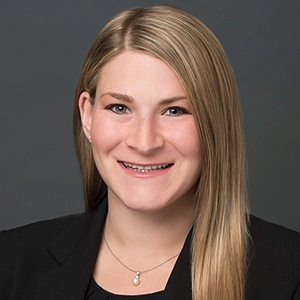 Nicole Ligon ’16 will join the Law School’s new First Amendment Clinic in September as a teaching fellow and supervising attorney. She is returning to Duke after practicing First Amendment litigation at Cahill Gordon & Reindel in New York.

As the clinic’s inaugural First Amendment Fellow, Ligon will provide day-to-day oversight of students’ casework on behalf of clients who claim infringements of their free speech rights, working closely with Professor H. Jefferson Powell, a distinguished scholar of constitutional law who directs the clinic. The clinic, which will welcome its first class of students in the fall semester, is funded by The Stanton Foundation.

“We are very excited that Nicole is returning to Duke Law after an exciting practice focused on first amendment law at Cahill Gordon & Reindel, where she worked with the legendary First Amendment lawyer Floyd Abrams,” Powell said. “A wide range of faculty knew her as a student and everyone agrees that she is incredibly sharp and dynamic.”

At Cahill, Ligon worked on First Amendment and media law matters regarding reporter’s privilege, media’s right of access, defamation, commercial speech regulations, and related issues. In March, she and two colleagues were honored by the Center for Appellate Litigation (CAL) for their work in helping its Books Beyond Bars project challenge proposed state packaging restrictions that would have prevented people incarcerated in New York prisons from receiving donated books by mail.

“Because Nicole is coming straight out of one of the nation’s leading firms in the free speech area, she has a great sense of what are the cutting edge issues and important areas in litigation,” Powell said.

For Ligon, those include issues concerning the interaction of government and media that have emerged in recent presidential administrations, including that of President Donald Trump. “It’s sometimes alarming to see how the media has been treated,” she said. “It has also been interesting to watch rising concerns over campus speech, with some colleges and universities trying to enforce speech codes. That can be problematic from a First Amendment perspective.”

Ligon entered law school with a strong interest in First Amendment and media law and gained exposure to artist, recording, and performance agreements, contract drafting, and intellectual property matters during an internship in the Lincoln Center general counsel’s office after her first year. In addition to her Law School courses in media law, First Amendment law, entertainment law, and “lots of writing-intensive classes,” Ligon said that spending her 2L summer at Cahill helped solidify her career goals, as her responsibilities included researching and drafting memoranda on topics such as the interplay between hostile work environment regulations and the First Amendment as well as free speech issues in the election law context.

“Between the classes I was taking, my summer associate experience, and the current state of media affairs, I realized that I wanted to focus my career on First Amendment and media law issues,” she said. She expressed gratitude for the early mentorship of Abrams, who has worked on some of the highest profile media and First Amendment law cases in recent decades, as well as that of Cahill partner Joel Kurtzberg.

Having been on campus recruiting for Cahill when she first heard about the First Amendment Clinic from Powell, she is thrilled to be part of its launch: “It’s an exciting time to work in the First Amendment space, and to work on these important issues at a place like Duke Law is an opportunity I couldn’t pass up.”