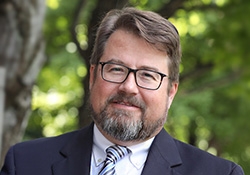 Clinical Professor Ryke Longest, who directs the Environmental Law and Policy Clinic, began a three-year term, in April, as chair of Scenic America’s board of directors.

Scenic America is a national nonprofit dedicated to preserving and enhancing the visual character of the nation’s roadways, communities, and countryside through a combination of public and corporate education and policy initiatives. In addition to fostering citizen engagement by assisting in the formation of state and city affiliate organizations, Scenic America promotes and supports advocacy around such issues as billboard and sign control, scenic byway conservation, tree ordinances, context-sensitive road design, historic preservation, and installation of utilities and wireless telecommunication towers.

“Scenic beauty is the charge of more than 300 federal and state agencies, but it is the main mission of none of them,” said Longest. “Yet it is important for human happiness, for art and literature. It’s important for our mental health to have a place of beauty that everyone — not just the wealthy — can repair to.”

Longest’s engagement with Scenic America began in 2012, when the Environmental Law and Policy clinic represented Scenic North Carolina in its efforts to protect restrictions on billboards along highways in Durham. He joined the board of the national organization, which prioritizes combatting billboard construction along roadways, after the local case concluded in 2014.

Longest is a co-author of Taking the Long View: A Proposal for Realizing America the Beautiful, a Scenic America white paper designed as a blueprint for the policy initiatives relating to the visual environment. Many of the recommendations, which include preserving community character, honoring parks and open spaces, celebrating gateways to iconic landscapes, and burying utility wires, also resonate with the goal of establishing livable, walkable communities, with public transit, places to sit, trashcans, and other amenities. “A community that is usable by all people is generally a beautiful community,” he said.

“Beauty is a companion to other forms of environmental protection.  We have to start thinking of ‘uglification’ as pollution.”