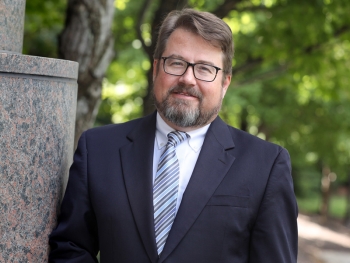 Longest, co-director of the Environmental Law and Policy Clinic, will serve a three-year term under a new model that will facilitate greater delegation of leadership responsibilities. The time-limited appointment, effective July 1, will allow transition between different clinical faculty members who over the course of their careers may take the position, Longest said.

“It allows for more diversity of leadership and diversity of approach, and also the ability for faculty members each to become intimately acquainted with the challenges that are presented by our existing clinical structure,” he said.

“In the next iteration of clinical practice at Duke, there will be even more growth in the subject matter, scope, and scale of the clinics, and also continued evaluation on how to build on the tradition of excellence that we have established and continue to be relevant in meeting both the needs of the clients and the educational goals and objectives of the students we serve.”

A graduate of the University of North Carolina School of Law, Longest joined Duke Law as a senior lecturing fellow in 2007 and founded the Environmental Law and Policy Clinic. A joint project of the Law School and Duke’s Nicholas School of the Environment, the clinic enrolls students from both schools who are supervised by Longest and clinic co-director and clinical professor Michelle Nowlin on matters involving environmental justice, climate change, water quality, natural resources conservation, endangered species protection, sustainable agriculture, public trust resources, and environmental health. Longest has a secondary appointment as clinical professor of environmental sciences and policy at Nicholas.

Prior to joining Duke, Longest worked for 14 years at the North Carolina Department of Justice, where he negotiated and led the state’s implementation of two multimillion-dollar settlement agreements that reduced the adverse impacts from swine farming. The impact of waste management remains a signature issue for Longest and the clinic. Recently, an article Longest co-authored with Lecturing Fellow Lee Miller, “Reconciling Environmental Justice with Climate Change Mitigation: A Case Study of NC Swine CAFOs,” was selected by the Environmental Law and Policy Annual Review as one of 2020’s best academic environmental law articles.

Foster has overseen a period of tremendous growth in the clinical program. When he arrived at Duke in 2002, he recalled, the Law School had only two clinics, one that was offered year-round and a second that was offered one semester per year. Clinical faculty were on annual contracts and had to raise their own salaries and budgets from external sources.

Foster launched the Community Enterprise Clinic, for which he now serves as director, from off-campus space shared with the Children’s Law Clinic before both moved into the dedicated clinic offices in the Law School. He also started and has taught in the Start-Up Ventures Clinic.

Today, Duke Law’s 11 clinics have stable and institutional funding and a dedicated wing in the Law School building, are led by 23 full-time clinical faculty members, and offer more than 200 student seats each year. Experiential education is supplemented by a robust externship program that includes Duke in D.C., and about three-quarters of each graduating class takes at least one clinic or externship – one of the highest participation rates among the top 14 law schools.

“Andrew Foster has done yeoman’s work for the Duke Law clinical program, taking on ever more responsibilities during a truly transformative time in its history,” said James B. Duke and Benjamin N. Duke Dean Kerry Abrams.

“A large majority of students now take at least one clinic, and many regard it as the most meaningful experience of their law school careers. We owe him immense gratitude for his role in the development of a program that stands among the nation’s best, and look forward to its continued evolution under the strong leadership of Ryke Longest.”

Foster stressed that the clinical program’s success has been a collaborative effort over many years between deans, clinic founders, and allies among the doctrinal faculty.

“Over the past 20 years we have represented thousands of clients and provided high-quality experiential educations for a significant percentage of Duke Law students,” he said. “We have built a culture that is collegial, committed to excellence, and strives to find a balance between our educational and service missions. I am proud of what we’ve done together and very excited to see what comes next for the Duke Law clinical program.”

As the university prepares for a return to campus, Longest said he expects there will be urgent space and resource considerations stemming from ongoing public health concerns and growth in Duke Law’s student population. But with proper coordination, those can be met without sacrificing the clinical experience that alumni consistently cite as excellent, he said.

“As director, I intend to keep that tradition going and also prepare for the future, because the challenges of yesterday will return and the challenges of tomorrow will be different than what we encounter today,” he said.

“The best news about this job is that I love the people with whom I am working in this environment, they are up to the challenge, and that makes me feel confident going forward. When it comes right down to the challenges we will be facing at the Law School, I wouldn’t want to work with a different faculty than we have.”