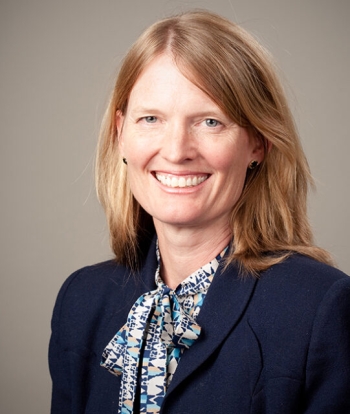 A faculty member since 2009 at Campbell Law School, where she taught constitutional law, civil procedure, First Amendment, information privacy, and administrative law, Ludington also served as its associate dean for academic affairs for the past three academic years. She received the Dean’s Award for Excellence in Teaching in 2015, the same year she earned tenure, and was voted Administrator of the Year by students in 2019.

Ludington was a visiting assistant professor at North Carolina Central University School of Law during the 2008-2009 academic year. From 2001 to 2008 she was a senior lecturing fellow at Duke Law, teaching Legal Analysis, Research, and Writing.

“Sarah promises to bring her longstanding expertise in the First Amendment, her wealth of teaching experience, and her mature administrative skills to the First Amendment Clinic,” said Jane Wettach, the William B. McGuire Clinical Professor Emerita of Law and founding director of the Children’s Law Clinic.

“Those of us who knew her when she studied and worked at Duke Law previously are welcoming her back with open arms. Those who will be getting to know her for the first time will undoubtedly soon come to admire her many talents.”

Ludington takes over leadership of the clinic from its founding director, Professor H. Jefferson Powell, a renowned scholar of constitutional law who launched the clinic in 2018 and remains on the governing faculty.

Ludington, who practiced libel defense litigation, said she is impressed with the growth of clinical education at Duke Law since she left and noted that the clinical faculty includes her classmates Sean E. Andrussier ’92, director of the Appellate Litigation Clinic, and Michelle Benedict Nowlin JD/MA ’92, co-director with Ryke Longest of the Environmental Law and Policy Clinic.

“I’m so proud of my alma mater because of everything it’s done to improve clinical offerings, the legal writing curriculum, and the entire skills curriculum,” Ludington said.

“I’m looking forward to working in a clinical setting where the core educational mission is about helping students develop their professional skills and their professional identity. It’s where learning gets translated into practice and I am very excited about that.”

Returning to North Carolina in 1995, Ludington taught English for seven years at schools including Durham Academy where, at a parents function, she ran into then Dean Katharine Bartlett, now the A. Kenneth Pye Professor Emerita of Law. Bartlett encouraged her to apply to Duke Law as a writing teacher, and for the next seven years Ludington taught LARW, as well as a privacy law seminar and a semester of First Amendment law co-taught with Douglas B. Maggs Professor of Law Stuart Benjamin.

During that period, in which three large data security breaches exposed the personal data of hundreds of thousands of people, Ludington wrote “Reining in the Data Traders: A Tort for the Misuse of Personal Information,” 66 Md. L. Rev. (2007), which proposes a new common law remedy for individuals “who have suffered harm to their core privacy interests of choice and control — choice about who may receive their information, control over the information revealed, and how the recipient of that information may use it.” She said she hopes to write an update to that paper.

“I had encountered a fair amount of privacy law in the context of practice and I became interested and started writing about it at a time when ‘Big Data’ and data privacy itself was an emerging issue,” she said. “European data laws were going into effect and America had nothing equivalent. People were trying to tease out how to resolve privacy concerns given the new technology capable of collecting tons of data about us. And many of the legal issues still haven’t been resolved.”

Her scholarship also includes “Aiming at the Wrong Target: The “Audience Targeting” Test for Personal Jurisdiction in Internet Defamation Cases,” 73 Ohio State L.J. (2012), in which she argued that the jurisdictional test adopted by North Carolina and other states in online defamation cases was flawed, and recommended using minimum contacts analysis instead.

“Sarah is one of my favorite co-authors,” said Gulati. “She has an infectious energy and curiosity that make working on a research project with her akin to an Indiana Jones adventure. At least, that was what it was like searching archival records in obscure museums, antique stores, and libraries around the world when we were attempting to unearth the truth behind what we discovered to be a largely false legend about the odious debts doctrine.

“Duke is fortunate to have been able to lure her back. She inspired me and I know she will be an inspiration to the students.”

Under the supervision of Powell and Lecturing Fellow and Supervising Attorney Nicole Ligon ’16, students have represented individuals in actions involving political speech and alleged defamation stemming from comments on social media, journalists barred from reporting activities, and other matters implicating the rights of free speech. In April the clinic secured summary judgment in a South Carolina federal defamation case in which its client was sued for more than $110 million in damages for comments he made online criticizing those behind a proposed rezoning in his town. The clinic also has filed several amicus briefs with the U.S. Supreme Court, most recently in support of a certiorari petition in Mckesson v. Doe, a case that concerns whether a protest organizer can be held personally liable for the actions of participant.

Demand for clinic services has far exceeded Powell’s expectations. “There are far more people than I imagined who have issues, concerns, problems that relate to freedom of expression and need to find reliable advice, assistance and legal representation,” he said.

“Instead of not having enough to do, we have been continuously busy, we have repeatedly had to turn down meritorious matters because of lack of capacity, and we have been able to give our students exposure to a full range of First Amendment-related litigation and advice-giving.

“Given the great need, the remarkably talented students the clinic attracts, and the great value of clinical education generally, I believe the First Amendment Clinic has a bright future under Sarah and Nicole’s leadership.”

In addition to its core mission of defamation defense, Ludington plans to expand the clinic’s engagement with local news outlets on libel defense and to engage clients who have been blocked from public officials’ social media feeds. She also plans to develop policy initiatives such as advocating for an anti-SLAPP statute in North Carolina. SLAPP (strategic lawsuit against public participation) generally refers to a libel suit filed by relatively more powerful parties, such as a public official or wealthy individual, against relatively less powerful parties with the intent of stifling criticism by forcing the defendant to incur the cost of legal representation.

Ludington described her new role at Duke Law as a career capstone.

“It brings together a subject that I love and am passionate about, an institution that I love and am incredibly proud to be associated with, and a style of teaching that I’m eager to master on behalf of the wonderful, talented students that go to the Law School,” she said.