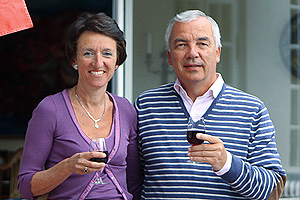 Marianne Philip and Per Haakon Schmidt each maintain powerhouse legal careers in Copenhagen — she as a capital markets and M&A specialist and board chair at Kromann Reumert, and he as head of the intellectual property practice at Plesner Law Firm, where he also focuses on European Union law and other areas. Two years ago the couple, who met as law students at the University of Copenhagen in 1977, added another practice to their busy lives: making fine Beaujolais wines in France.

The endeavor began with the purchase of an 1842 castle and winery as a family vacation home. Within their first year as wine producers at Chateau Grand’Grange vineyard, each of their two red wines won bronze medals in competition against others produced in Beaujolais at the Villefranche sur Saone exhibition and at an exhibition at Macon for wines produced across Burgundy.

Clearly passionate about oenology, Schmidt wants to prove it is possible to produce “good and full-bodied” Beaujolais wines that are “still fruitful if you take the necessary care and use old grape vines,” he says.

“We are having a great but demanding time renovating the beautiful old buildings and updating the winery,” he says. “Marianne is the sales manager, and even if this is my passion more than hers, we will both enjoy this challenge for many years to come.”

That doesn’t mean they will be winding down their lives in the law any time soon. Schmidt continues to enjoy the intellectual property litigation he started practicing at Plesner in 1978, when it was a relatively new field, and resumed when he returned after his LLM studies and a year at the firm now known as Holland & Knight in New York.

“Back in the 1980s, IP law was still a fairly unknown specialty in the broad legal community,” says Schmidt, who also has a mediation practice. “Now it’s hard to find a transaction that does not focus in some way on IP-related questions.

“I have handled cases across the IP spectrum, from patent protection of computer programs to theft of works of art, including landmark cases in the Supreme Court on copyright of Danish design, on the extension of copyright protection for drawings on the Danish currency, and on injunctions against telecommunications companies giving pirates access to music and film sites,” adds Schmidt, who earned a degree in art history at the University of Copenhagen earlier this year.

For 12 years, he also taught courses in IP and competition law at the University of Copenhagen Law School, where he obtained his SJD in 1989. Schmidt also taught at “Duke in Denmark,” as the Law School’s summer institute in transnational law was known in its early years (see box). Today he continues to teach IP law to the young attorneys at Plesner, where he is a partner.

“To us, it was a great achievement to have Duke come to Denmark. The world was not as globalized as today ... but developments since then have shown how important such institutes are to gaining human insight into different cultures and providing individuals with opportunities to further their understanding of law and culture in a different environment.”


Philip started her legal career at Reumert & Partners, Kromann Reumert’s predecessor, taking a leave of absence when she and Schmidt came to study at Duke shortly after the birth of their first child. A year spent working on mergers and acquisitions at Shearman & Sterling in New York following her LLM sealed her specialty, she says. “When I returned to Copenhagen, I focused on expanding that part of the business at our office, which had been a more general corporate practice focused on transportation, shipping, and insurance law.”

A partner at her firm since 1987, Philip advises businesses on M&A, stock exchange law, and general commercial and company law. She has advised on several landmark capital markets and M&A transactions in Denmark, assisting both Danish and international clients, and she also serves as non-executive director on a number of boards. Since June 2009, Philip has been vice-chairman of the Danish Corporate Governance Committee, which published new corporate governance recommendations last year. She has spent quite a lot of time since then training corporate officers and lawyers on the operation of the recommendations.

Philip and Schmidt have maintained strong connections to Duke Law School in the years since their graduation, helping organize alumni events in Europe and returning often for reunions. Philip also has been active on the Board of Visitors, now serving as a lifetime member. During the four years that the Law School’s summer institute was held at the University of Copenhagen, the couple hosted an annual party for students and faculty at their home — “which was a lot of fun and made it easy to stay in touch,” Philip notes.

The couple agree that their lives are challenging. “With a busy career, three children and now two grandchildren and two daughters-in-law, you need to be very well organized, efficient, and punctual in daily life,” she says. “Family life has always been important to us, and we have taken the children with us to many conferences over the years.” Their two eldest, Mikael and Jesper, have followed their parents into law practice and law school, respectively. Their youngest son, Frederik, is a teenager.

Their winemaking enterprise adds a new dimension to family life, Philip says with a laugh.

“We spent a wonderful Easter vacation there with some of our family,” she says. “It is a different, but very nice, way of being together when you spend half a day packing 200 boxes of wine.”