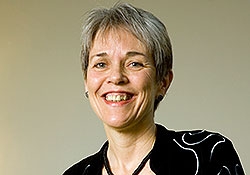 Carolyn McAllaster, the Colin W. Brown Clinical Professor of Law and director of the HIV/AIDS Policy Clinic, will receive the NC AIDS Action Network’s Advocate of the Year Award for 2018. The award is presented annually to an advocate who has made a meaningful and lasting impact in their advocacy on behalf of people living with HIV in North Carolina.

McAllaster, who in 1996 founded Duke Law’s  Health Justice Clinic (then known as the AIDS Legal Project), also serves as project director for the Southern HIV/AIDS Strategy Initiative (SASI), advocating for increased federal resources to stop the spread of HIV in the South, which has the highest rates of new infection and HIV-related deaths in the United States. She also engages in national and global policy advocacy.

“Carolyn was a founding board member of NC AIDS Action Network and her work with SASI has helped inform a research base that has changed the way we talk about the importance of HIV treatment and prevention in the South,” said Lee Storrow, executive director of the NC AIDS Action Network. “She's been a voice at the federal level for the needs of Southern states, and helped lead the way on a number of policy wins for our community, including modernizing the Housing Opportunities for Persons with AIDS funding formula, increasing federal funding to rural communities, and modernizing North Carolina's HIV criminal law.”

McAllaster will be honored Nov. 16 at a public reception at Durham’s Dos Perros restaurant, being held in advance of the NC HIV Advocacy Conference 2018, titled “Building Power Across the Spectrum.” (RSVP required.)