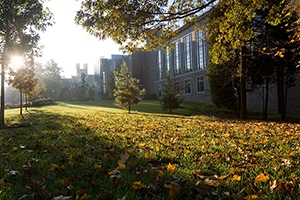 Members of the Duke Law School faculty have authored a statement voicing their opposition to North Carolina House Bill 2, a law that they say “excludes members of the LGBTQ community from legal protections against discrimination based on sexual orientation and gender identity.” The statement, along with 152 signatures from Law School faculty, staff, and administration, was sent to state legislators and Gov. Pat McCrory on April 21. A letter in support of the Law School statement, written by members of the faculty and staff of Duke’s Sanford School of Public Policy, along with 68 signatures, was also sent to the legislature and Governor.

We, the undersigned members of the Duke Law School faculty and administration, declare our strong opposition to North Carolina House Bill 2 (HB2).

We value every member of our community and are committed to creating an educational environment at Duke Law School that affirms all students, staff, and faculty and that affirms the lived experiences and human rights of LGBTQ persons.  We believe that everyone should live, work, and go to school in a state that does not tolerate discrimination.

We likewise believe that transgender persons attending public schools or visiting public agencies should be free to choose restrooms consistent with their gender identity, a choice that HB2 makes unlawful. Local schools, universities, and agencies have been developing thoughtful solutions to these issues and should not be held back in these constructive efforts.

The bias underlying HB2 is hurtful for LGBTQ persons and their families. HB2 also makes North Carolina less inclusive, welcoming, and diverse. Governor McCrory’s Executive Order purports to address criticisms of the law by business and community leaders, but in fact falls far short of correcting HB2’s many harms.

We therefore call on the North Carolina General Assembly and Governor McCrory to repeal House Bill 2 in its entirety.

We, the undersigned members of the faculty and staff at the Sanford School of Public Policy, support the petition from colleagues at the Duke Law School in opposition to the North Carolina House Bill 2 (HB2).