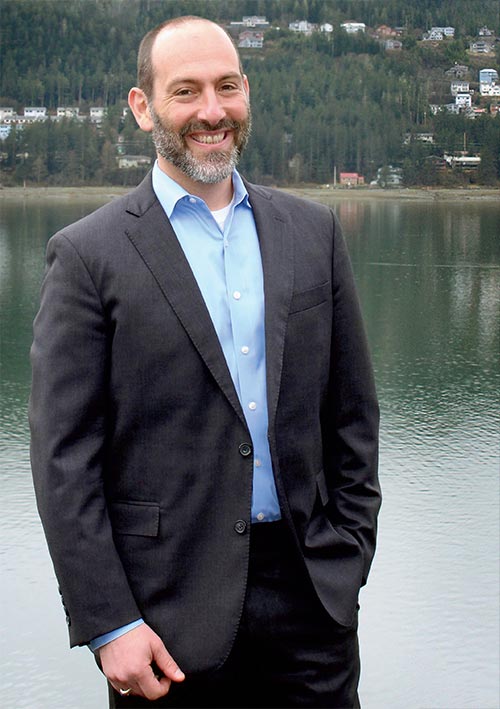 “I feel very lucky, every day, that my life, work, and passions overlap in Alaska.” — Michael LeVine JD/MEM ’00

In early November, Michael LeVine opened his keynote address at a Duke Law symposium on ocean conservation by expressing a debt of gratitude to Duke. “I feel very lucky, every day, that my life, work, and passions overlap in Alaska,” he said.

The Maryland native discovered Juneau, his home since 2002, when he worked there during the “extra summer” of his dual-degree program at Duke in law and environmental management. “I decided to apply to internships in the farthest-ﬂung places I could possibly imagine, Hawaii and Alaska,” he says. “I ended up in Juneau and fell in love with Alaska.”

He made a beeline back after completing post-graduate clerkships for judges of the U.S. District Court for the District of Maryland and the Eleventh Circuit Court of Appeals. Today, he is a highly respected expert on sustainability and conservation in Alaska and the Arctic region.

LeVine, who joined Ocean Conservancy as senior Arctic fellow in September 2017, earlier worked at Earthjustice as a litigator, and Oceana as Paciﬁc senior counsel. During his time at Earthjustice, a nonproﬁt, public interest law ﬁrm, LeVine litigated a range of cases, primarily in federal courts, relating to forest management, energy, and ﬁsheries.

His extensive work on oil and gas development issues included the ﬁrst — and possibly the only — successful direct challenge to the approval of a proposal to drill exploration wells offshore. In that litigation, the case brought by an alliance of conservation groups was consolidated with a challenge brought by the North Slope Borough and Alaska Eskimo Whaling Commission. Eventually, the court agreed with the arguments brought on behalf of the two groups of plaintiffs that there was faulty analysis of the potential impacts from drilling activities on the breeding, feeding, and migratory patterns of the whales on which the coastal communities subsist.

“We challenged the approval of Shell’s ﬁrst exploration plan, which would have allowed the company to drill in the Beaufort Sea between 2007 and 2009, and the Ninth Circuit issued an injunction stopping the boats on their way into the Arctic Ocean,” LeVine says. That case jumpstarted efforts that LeVine helped lead to protect the Arctic Ocean from risky oil and gas activities. Those efforts have been very successful, as Shell and other companies that owned leases have abandoned plans and, for the most part, left the U.S. Arctic Ocean.

Around the same time, LeVine, acting as a contract lawyer, also represented a coalition of communities and conservation organizations in a lawsuit that successfully prevented aerially spraying of pesticides on traditional hunting and gathering land in Southeast Alaska. That proposal has never been revisited.

Both at Oceana and at Ocean Conservancy, LeVine has continued to work with local communities and tribes. He counts the process of learning about those communities and identifying ways to build relationships as among his most important and illuminating undertakings.

“For a period of time while I was at Oceana, we had a native elder on staff, a very-well respected leader named Caleb Pungowiyi,” LeVine says. “He’s since passed away, but I was very fortunate to be able to learn from him, to travel to communities with him and just watch as he interacted with people. I see those experiences as opening the door for me just enough to know that I don’t even know what the right questions are. We’re talking about learning from people who have inhabited coastal communities for tens of thousands of years and who have a very well-earned distrust of those of us who might be well-intentioned but can’t possibly understand what it means to be part of their communities and cultures.”

He recalls supporting the efforts of 76 federally recognized tribes to improve management in the northern Bering Sea. The effort eventually led to an executive order signed by President Barack Obama creating the Northern Bering Sea Climate Resilience Area. For LeVine, however, it began with a mapping project.

“The communities were concerned about changes in ocean conditions, increased vessel trafﬁc, and the possibility of large-scale commercial ﬁshing moving into the region,” he says. “At Oceana, we had GIS mapping expertise and a PhD oceanographer, and Kawerak, Inc., had social scientists and GIS information they had already documented with community experts. We collaborated to use those tools to support development of a map atlas that synthesized western science and subsistence-related information for the Bering Strait region. The process was unique because it merged western science with traditional knowledge, on an equal basis, and provided a tool for communities to use as they worked to participate in federal management processes. Through that course of shared experience and that exchange of knowledge, we built trust.”

Over his 10 years at Oceana, LeVine focused on issues related to oil and gas, ﬁsheries management, and climate change. He believes that policy solutions in those areas must address the need for resilient communities, healthy ecosystems on land and offshore, and the economic well-being of the State of Alaska.

“The conversation has to start with a recognition that Alaska’s economy is disproportionately dependent on revenue from oil and gas and that, as an Alaskan, it’s not reasonable to oppose all activities,” LeVine says. “That does not, mean, however, that we should greenlight everything the oil industry wants or that there isn’t room for healthy debate about the future of our communities and ecosystems. For example, decisions that were made in the 2000s to sell leases and authorize exploration in the Arctic Ocean were clearly made in an absence of good scientiﬁc information, without a clear plan for what we want the Arctic region to look like in the future. If we were to start over, we could do better.”

LeVine’s work also includes efforts that led the North Paciﬁc Fishery Management Council and National Marine Fisheries Service to implement the Arctic Fishery Management Plan, which closed more than 200,000 square miles to ﬁshing until there is enough information to show that it could occur sustainably.

“It is one of the biggest precautionary measures implemented in the U.S.,” he says, noting that Alaska is home to several ﬁsheries, including the world’s largest, the pollock ﬁshery in the Bering Sea. “And in November 2017, there was an agreement reached between 10 nations that will result in a binding agreement not to ﬁsh in the unregulated Arctic Ocean. So this model of precautionary ﬁsheries management has been expanded from U.S. territory to international waters.”

LeVine continues to work on similar issues at Ocean Conservancy in the face of new challenges: The administration of President Donald Trump has already undone some of the “hard-won” successes from the past eight years and has begun processes to undermine others. But maintaining optimism in the face of unlikely odds and difﬁcult hurdles is essential for an advocate, he says, noting that he gained that insight at Duke Law.

“Toward the end of my time at Duke, then-Dean Tom Metzloff told me that one of the great changes he’s seen in his life has been the relative end of littering,” LeVine recalls. “It’s no longer acceptable to drive down the road and just throw your fast food wrapper out the window. But it was. That has really stuck with me as an example of fundamental change resulting from advocacy that future generations have simply accepted as part of everyday life.”

He gained further perspective, he adds, through a seminar assignment from Christopher Schroeder, the Charles S. Murphy Professor of Law and Public Policy, in which the class read the front page of every New York Times Sunday edition and magazine section from 1969 to 1971.

“The purpose of the seminar was to learn about how public movements, in this case the environmental movement, come about,” LeVine says. “And the headlines showed all of these things that we think of separately, happening in short order. We landed on the moon two days after Senator Kennedy crashed in Chappaquiddick, and the Miracle Mets were heading toward their World Series win around that same time. There was this amazing overlapping of enormous social, cultural, and scientiﬁc issues. It’s only when we look back that we can see all of the factors that helped a movement take shape at that time. Perhaps we are in another of those moments or can begin to set one in motion.”

In December, Alaska Gov. Bill Walker appointed LeVine to the Climate Action for Alaska Leadership Team, a 20-member group that will focus on climate change mitigation, adaptation, research, and response for Alaska.

LeVine says his recent return to Duke Law for the Duke Environmental Law and Policy Forum’s Oceans Symposium, where he discussed the myriad challenges facing Alaska and the Artic, gave him an appreciation for the strength of the Law School’s environmental law program — and hope for continued progress: “The clinical program, the faculty, it’s such an important part of the Law School. That makes me really excited for the future.”