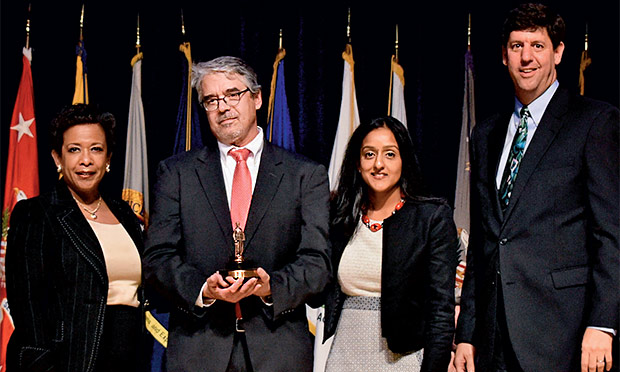 Michael Lieberman is philosophical about investing 13 years in the effort to expand federal hate crimes laws. “Policy work is slow, but it has the potential to make a real impact,” says Lieberman, the Washington counsel and director of the Civil Rights Policy Planning Center for the Anti-Defamation League (ADL).

Congress finally passed the Matthew Shepard and James Byrd Jr. Hate Crimes Prevention Act (HC PA) in 2009, giving federal authorities the right to prosecute hate crimes motivated by a victim’s gender, gender identity, sexual orientation, or disability, and expanding resources for investigations and prosecutions. Lieberman contributed significantly to the law’s development and passage, both through his ADL post and as organizer and leader of a coalition of organizations representing diverse communities across the country. And he has remained active in its implementation and enforcement in multiple ways, including working to build trust between vulnerable communities and law enforcement agencies and filing amicus briefs in federal and state hate crimes appeals.

Last fall, Lieberman received the Attorney General’s Award for Meritorious Public Service, the top public-service honor granted by the U.S. Department of Justice, designed to recognize a citizen’s significant contributions to the department’s accomplishment of its goals. In announcing the award, Attorney General Loretta Lynch cited his “collegial and constructive” efforts relating to the passage and enforcement of the legislation.

The HCPA is “a major statement about the right to equality and to freedom from violence,” says U.S. Criminal Deputy Solicitor General Michael Dreeben ’81, who has argued a number of seminal hate crime cases in front of the U.S. Supreme Court — and who also happens to have been Lieberman’s roommate during law school. “Michael has dedicated his talent and his career to enrich lives of citizens generally. There are not many lawyers who have done this very special thing.”

Lieberman, who joined the ADL in 1982, sees the HCPA as a vital tool in his continuing civil rights advocacy — but not a panacea. “Every day when I walk through the two steel-reinforced doors to my office, I am reminded of the persistence of hate crime,” Lieberman says, adding his view that the present uncivil election campaign and fierce partisan divide has contributed to a particularly dispiriting climate of mistrust and fear, he says. “It is the worst since 9/11.”

It’s what he always wanted to do. He grew up in Ohio, in a close-knit Jewish community where volunteerism and the Judaic concept of “tikkun olam” (literally, “repairing the world”) were foundational values. He majored in Judaic Studies at the University of Michigan, and went straight to law school, choosing Duke largely as a place to escape frigid Midwestern winters. And in spite of finding little institutional support for public interest careers at Duke Law in the late 1970s, he kept his goal in mind, taking a job with the ADL in Columbus, Ohio, after a brief stint on Capitol Hill.

“I was looking for a job where I could combine civil rights, Jewish community, and constitutional law with a range of advocacy elements, and this was a perfect fit,” says Lieberman. The ADL, which was founded in 1913 to fight anti-Semitism and all forms of bigotry, has a current mission “to secure justice and fair treatment for all.” Lieberman soon moved to Chicago as the organization’s Midwest civil rights director, and in 1989 became the group’s Washington counsel.

Over the years Lieberman has taken note of shifts in social sentiment and striking changes in how hate is spread. “It used to be that if you wanted to threaten someone, you had to mimeograph papers, drive over, and physically place them on their driveway. Now, there’s the Internet. It’s so easy to use Twitter.” But he acknowledges that social media also makes it easier to confront hate. “The United States is unique in our protection of free speech, including hate speech,” says Lieberman, an active tweeter. “That just makes it important to speak up with better speech, and encourage others to do so too. It can be empowering.”

Writing is, in fact, key to Lieberman’s work, and it’s a skill he gained at Duke. “I’m so thankful for the legal writing program,” he says, recalling his relief when it “clicked” with him in the middle of a tough first year. “I could not be doing what I’m doing now without a law degree, and a big part of that is being able to write like a lawyer.” Winning a “write-on” position on the Duke Law Journal was a highlight of his time in law school, as was founding another, the Duke International and Comparative Law Institute. Though the Institute published only one issue as part of Law and Contemporary Problems in 1981, Lieberman feels the editors demonstrated the need for more student-run journals at Duke.

Another Duke highlight: his classmates. “There was some magic in the makeup of that class,” Lieberman says. “It was such a geographically diverse, multi-dimensional, supportive group of people.” He is delighted to still be working with Dreeben, who argued such cases as Virginia v. Black, a challenge to criminal cross burning statutes, and Wisconsin v. Mitchell in which the Supreme Court upheld the constitutionality of enhanced penalties for crimes motivated by bias (Dreeben argued for the federal government in urging the Court to uphold the Wisconsin hate crime statute).

The two regularly meet for lunch with two other D.C.-based classmates, David Wittenstein and Russell Fox, but not to discuss social issues. Their agenda: family and sports.

“Anti-discrimination proponents should feel lucky he wasn’t born 6'5",” Dreeben jokes of Lieberman’s passion for basketball. “He was the driving force behind our law school basketball team — a great point guard.” Lieberman also served as announcer for the Duke women’s basketball team in Cameron Indoor Stadium. “He’s got this incredibly loud voice,” says Dreeben. “He had a microphone, but definitely didn’t need one.”

“There is really good work to be done and really good people to work with,” says Lieberman. He encourages law students to look for internships in the field. “Identify the area that you see as a galvanizing force, whether that’s the environment, or women’s issues, or civil rights, or Jewish issues. Then go do it,” he says, making a pitch for involvement in the ADL’s Summer Associate Research program, in which law clerks summering at firms across the country tackle the toughest legal research questions the organization encounters through the year.

“It’s a really interesting, hands-on experience, and you know the work you’re doing is being used to secure justice.”