Sponsored by CICL, LENS, The Office of Public Interest & Pro Bono, and the Program in Public Law.

Having publicly opposed the U.S. invasion of Iraq, Michael Scharf was surprised to be invited to help train the judges, prosecutors, and defense counsel of the Iraqi High Tribunal who would try Saddam Hussein. Previously he had advised and trained judges for such war crimes tribunals as those in Rwanda, Sierra Leone, the former Yugoslavia, and Cambodia. Now Scharf and colleague Michael A. Newton offer an "unvarnished" look at the trial in Enemy of the State: The Trial and Execution of Saddam Hussein.
More on Michael Scharf 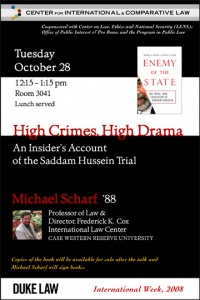