Mr. Chung Dong-young was the presidential candidate of the ruling United New Democratic Party in the 17th presidential election which took place in December of 2007. He was defeated by President Lee Myung-bak of the opposition Grand National Party. Mr. Chung was the South Korean Minister of Unification from April 2004 until December 2005. He was twice Chairman of the Uri Party (now the United New Democratic Party), the government party which he co-founded, and also was elected to the National Assembly for two consecutive terms.

During his tenure as minister, Mr. Chung carried out a North Korean policy based on his vision that peace can be achieved on the Korean peninsula only once North Korea can survive economically and eventually realize economic prosperity. This he dubbed Peace-economy. Mr. Chung's Peace-economy takes one step further former president and Nobel Peace Prize winner Kim Dae-jung's Sunshine Policy, which called for the peaceful co-existence and reconciliation of the two Koreas. Mr. Chung's policy took on a series of projects designed to revive the North Korean economy which would induce reforms and opening of the North Korean society, creating the grounds to solve the many problems facing the Pyongyang regime. One of these projects is the ambitious development of a vast industrial park in Gaeseong, a city in the North just above the DMZ, once part of Pyongyang's invasion route of the South. His vision that peace is profitable is laying one more stepping stone for the reunification of the Korean peninsula. 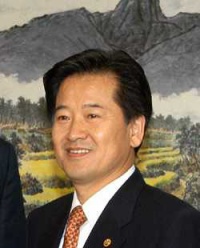