Nadia Prinz ’11 first saw law as a possible career while volunteering at a domestic violence shelter during her junior year at Washington and Lee University. Interacting with the children at the shelter was meaningful enough to Prinz to create a lasting interest in child advocacy.

“I wanted to give those children a voice,” she says. “I went to court and watched my clients’ cases. Sometimes the victims, many of them mothers, were able to get some justice or at least a restraining order against their attackers, but rarely did I feel that any resolution had been reached as regarded the children and their best interests and safety."

Prinz, now an aspiring prosecutor, initially visited the courtroom in order to better understand the legal issues facing domestic violence victims. “I was enthralled by the whole process, but I really enjoyed watching the various styles of oral advocacy. The experience taught me how much it matters to a case how well prepared and well-spoken the lawyer is,” she says. “That had never occurred to me before.” She began attending trials whenever she had a free morning.

Her time in the courtroom started Prinz down a path that led to Duke Law School, albeit not immediately after graduation. The classics and German literature major, a native of Luxembourg, spent one year prior to law school teaching young children in Germany as a Fulbright Scholar.

Last summer, Prinz returned to Europe and participated in Fellowships at Auschwitz for the Study of Professional Ethics ( FASPE), where she and other law and medical students toured Auschwitz-Birkenau, Berlin, and Krakow and analyzed the failures of the legal profession during the holocaust as a sort of case-study for contemporary legal, professional, and societal responsibility.

The FASPE program was of particular interest to Prinz because of the program’s discussion on prosecutorial ethics and the distinction between the legal and the just. “In participating in the FASPE fellowship, I wanted to explore the idea that lawyers have a dual responsibility, a duty towards our legal system but also to our society in the larger sense,” she says. “Many lawyers in the Third Reich were merely carrying out their professional responsibilities, but in doing so they allowed for and contributed to the atrocities of the holocaust.”

At Duke, Prinz serves as co-chair of the Public Interest Law Foundation (PILF) and of the Immigration Education Project (IEP). She also spent one semester participating in an externship with the Advocates for Children’s Services, which she describes as “an eye-opening look into our educational system.” During the externship, Nadia became more aware of how much some of the children and their parents are disadvantaged in their battles with the educational system, because the parents themselves have received an inadequate education. Prinz described this observation as a “vicious cycle” -- parents who did not receive a good education are less able to demand better for their children, and those children are more likely to be in the same position when they are parents.

Duke Law has helped Prinz balance her myriad activities and coursework. “What I’ve enjoyed most about Duke are the people. I have had several professors who have really inspired and supported me and I’ve met some really wonderful friends,” she says.

Prinz says she found inspiration and guidance from Professors Doriane Coleman, Donald Beskind, and Kathy Bradley. “I love evidence, and I love anything to do with children and the law or family law. More importantly however, those professors taught those classes in a way that was engaging and made me want to practice law in those areas; they communicated and instilled a real enthusiasm for their topics.” 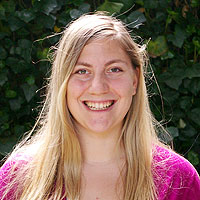