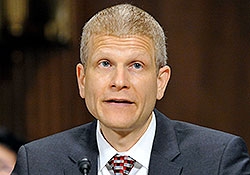 The practical importance of constitutional law is obvious from media coverage of such hot-button issues as health care, gun control, ballot access, abortion, and same-sex marriage, all recent (and possibly future) topics of deliberation and binding decision by the United States Supreme Court.

In the introduction to their new book, United States Constitutional Law (Foundation Press, 2019), David W. Ichel Professor of Law and Professor of Political Science Neil Siegel and Daniel Farber, the Sho Sato Professor of Law at the University of California, Berkeley, explore the dynamic “interactive process” between the Supreme Court and a range of actors and institutions who make claims on the Constitution in the sphere of constitutional politics, including social movements, political parties, and governmental institutions. “A mature and balanced understanding of constitutional law,” Siegel said, “requires close attention both to the legal doctrine that is developed by the U.S. Supreme Court and to the ideas about the Constitution that circulate in constitutional politics.”

Siegel takes a similar approach in his wide-ranging body of scholarship on matters of constitutional law, theory, and politics, considering ways in which a methodologically pluralist approach can accommodate changes in society and the needs of American governance while remaining disciplined and bound by the rule of law. In addition to teaching Duke Law students and undergraduates in Duke University’s Trinity College and in the Law School’s DC Summer Institute, which he directs, Siegel teaches judges in Duke’s Master of Judicial Studies Program. A former Supreme Court clerk — as is Farber — Siegel served as special counsel to Sen. Christopher Coons during the U.S. Supreme Court confirmation hearing of Justice Brett Kavanaugh, having earlier advised Coons during the confirmation hearing of Justice Neil M. Gorsuch. He also served as special counsel to then Sen. Joseph R. Biden during the Supreme Court confirmation hearings of Chief Justice John G. Roberts and Justice Samuel A. Alito. 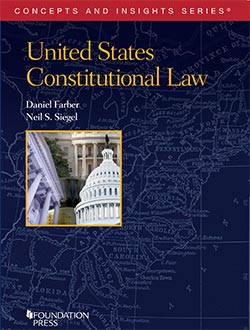 Siegel’s book with Farber introduces a diverse group of readers — students of law and political science, scholars, teachers, and engaged citizens — to the prevailing theories and “modalities” of constitutional interpretation. Siegel and Farber also take them through general themes and critical doctrines of constitutional law. “Subsidiary nuances can more easily be understood once the overall pattern is clear,” they write. “[I]t is impossible to truly grasp constitutional controversies without understanding how institutions, political parties, and social movements, not just doctrinal logic, have shaped legal outcomes.”

The authors explain each of the principal methods of constitutional interpretation and illustrate how each can “push an interpreter in different directions with respect to a particular constitutional question. Typically, however, interpreters invoke multiple modalities in support of a different interpretation, and they present them as mutually supporting, like strands in a rope.”

Siegel and Farber undertake a methodical examination of major areas of Supreme Court doctrine that are covered in foundational constitutional law courses in law school. In doing so, they bring in insights and historical changes that are central to many constitutional development courses in political science. “Those insights,” Siegel said, “include the influence of both partisan politics and constitutional politics on judge-made constitutional law, as well as the significance of judicial ideology in accounting for judicial decision-making.” As for significant historical changes, he noted as examples “the movement from the Articles of Confederation to the Constitution, the Civil War, Reconstruction, industrialization, the Great Depression and the New Deal, the Civil Rights Movement, second-wave feminism, and the gun rights movement.”

After showing how “the Court itself claimed ownership” of the authority to declare laws or presidential actions unconstitutional in the early 19th century and how it slowly expanded that authority over time, Siegel and Farber devote several chapters to the expanse and limits of congressional power and the nuances of executive power. They then turn to matters of individual rights, including the state action doctrine, incorporation, economic liberty, and equality guarantees in the areas of race and gender. Their penultimate chapter tackles what they describe as “perhaps the most controversial area of current constitutional doctrine,” that related to modern substantive due process (including the rights to marriage, procreation, contraception, abortion, same-sex intimacy, and same-sex marriage).  Siegel describes gay rights as encompassing “issues on which public views changed very rapidly in the early 21st century, as did Supreme Court doctrine, and not unrelatedly.”

They end their book with a consideration of congressional power to enforce the Reconstruction Amendments, which is central to current debates and Supreme Court rulings relating to voting and electoral politics. The most notable recent such ruling is Shelby County v. Holder, the 2011 decision that struck down a key provision of the Voting Rights Act. This decision illustrates, they write, that “the struggle between advocates of states’ rights and advocates of national power remains ongoing, with implications both for federal power and for individual rights.”

Their broader goal in writing the book, part of the publisher’s Concepts and Insights series, is to demonstrate “how constitutional law is neither entirely autonomous of political forces nor simply a passive reflection of them,” they write. “We do not know what the Constitution’s third century will bring in the way of doctrinal change,” they conclude, “but we are confident that this interaction between constitutional law and constitutional politics will continue.”

Leading scholars have praised Siegel and Farber for their comprehensive yet accessible approach to a complex subject. “Clear, concise, and judicious, this splendid book will interest professors, lawyers, and students alike,” wrote Jack Balkin, the Knight Professor of Constitutional Law and the First Amendment at Yale Law School.

“Anyone with an interest in constitutional law will find this book accessible and engaging; experts in the field will learn a lot from it,” wrote David A. Strauss, the Gerald Ratner Distinguished Service Professor of Law at the University of Chicago. “This is a genuinely impressive achievement.”