New Developments in LGBT Rights within the Inter-American System 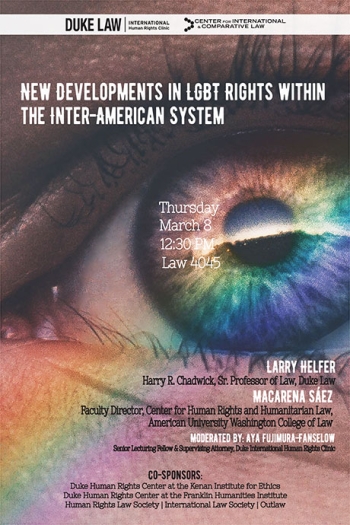 New Developments in LGBT Rights within the Inter-American System

Professor Macarena Sáez, Faculty Director of the Center for Human Rights and Humanitarian Law and Fellow in International Legal Studies at American University Washington College of Law and Professor Larry Helfer, Harry R. Chadwick, Sr. Professor of Law and Co-Director of the Center for International and Comparative Law will discuss “New Developments in LGBTQ Rights within the Inter-American System.”  The Inter-American Court of Human Rights recently issued a groundbreaking advisory opinion on gender-identity rights and same-sex relationships.  The court affirmed that “the recognition of gender identity by the State is of vital importance to guaranteeing the full enjoyment of the human rights of trans people,” and described the responsibilities of states to safeguard those rights.  The court also recognized the protection of same-sex relationships under the American Convention of Human Rights and recommended legal and institutional measures to protect them.  Professor Helfer will provide an overview of the Inter-American system and LGBTQ rights in international law, and Professor Sáez will deliver remarks on the content and consequences of the advisory opinion.

Macarena Sáez is the Faculty Director of the Center for Human Rights & Humanitarian Law and a Fellow in International Legal Studies at American University Washington College of Law (AUWCL). She teaches in the areas of Family Law, Comparative Law, and Human Rights. Professor Sáez was one of the lead counsels for the victims in the first case on sexual orientation before the Inter American System of Human Rights Karen Atala and daughters v. Chile. She has given her expert testimony on issues of sexual orientation and gender identity before the Constitutional Court of Colombia and the Inter-American Court of Human Rights. She supervised a team of AUWCL students who wrote a legal brief and participated in the hearings before the Inter-American Court of Human Rights regarding AO 24/17 on sexual orientation and gender identity. She has written extensively on gender, sexuality and the law, especially on the issue of marriage equality.